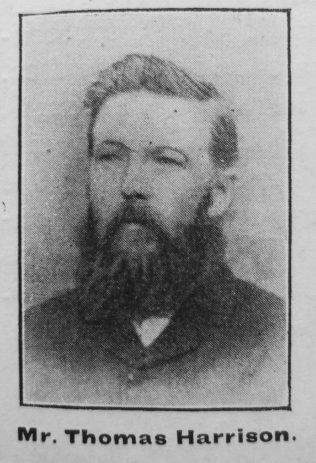 Transcription of Obituary in the Primitive Methodist Magazine by G.J.L.

The Alston Circuit suffered severe loss in the death of Councillor Harrison, of Nenthead. He was born April 21, 1858, and ascended to God after a lingering and painful illness on May 22, 1903. At the commencement of a Primitive Methodist Sunday school in his native village in 1860, he was a scholar, and was enrolled as a teacher in 1864. In 1866 his name appeared on the circuit plan. In his capacity as a local preacher our deceased brother was well received, and gave himself unstintedly to his work. His diligent and successful preaching was recognised by the circuit, and he was recommended for the Itinerancy in 1868. Satisfying the examiners as a candidate, he was mentioned for the Sunderland Institute, but inflammation of the lungs supervened upon a cold caught at one of his preaching appointments, and he was compelled to abandon the idea of the Christian ministry. His subsequent years were given to different phases of the circuit life with great devotedness. In 1870 he became a trustee for Nenthead, in 1874 a class-leader. In 1877 he was elected a delegate to North Shields District Meeting. In 1879 he became circuit steward, holding the office to the time of his decease. From the year 1887 he held the superintendency of the Sunday school at Nenthead. He was unanimously appointed a delegate to the Edinburgh Conference in the year 1895.

His church duties were but a tithe of his labours. He took a leading part in local politics, and was possessed of a vigorous public spirit, served on the District Council, on the now demolished School Board, on the Board of Gurdians and on many other local institutions for the benefit of the people. His Christianity was not quiescent. He lived a full-orbed life, and was full of the spirit of the Christian reformer. Mr. Harrison possessed many outstanding characteristics. He was full of simplicity, exceedingly modest, very orderly in all his affairs, whether church or daily business. He loved peace and had an utter detestation of brawls. He was exceedingly reverent in his attitude to the service of God, the Bible, and Christian ministers. He had a cautious mind, a firm grip of the Gospel verities, and was ever an ardent but patient seeker of truth. He was a thorough-going Primitive Methodist, almost an ultra-Priniitive. There was no doubt that to him his Church was the best of all Churches. He won the affection of children to a remarkable degree.

Rev. W. Robson, in a letter to Mrs. Harrison, says, “I shall never forget how Mr. Harrison probed my heart as to becoming a minister. He was the first to turn my attention to the Christian ministry. He was the means under God of leading me to devote myself to it, and I shall ever cherish his memory with gratitude and affection.” Many other letters bearing excellent testimony to the intrinsic worth of our deceased brother were received by the sorrowing widow and family. Mr. Harrison died at the comparatively early age of 55, but measured by noble thoughts and devoted service he lived long.

The funeral service was largely attended, the school children walked in front. There were representatives from all local institutions; also from “The Nenthead Mining Company, Villa Montaine, under whom he was a faithful official for years.”

On June 14th the Rev. G.J. Lane, F.R.G.S., preached an “In Memoriam” sermon to a crowded congregation, who held the deceased in utmost respect.

Thomas was born in 1848 (not 1858, as printed in the obituary) at Nenthead, Cumberland, to parents William, a lead ore smelter, and Sarah.