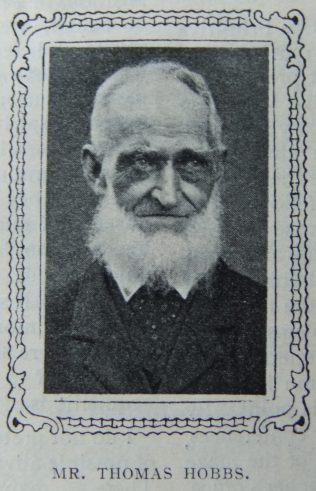 MR. THOMAS HOBBS was born at Newtown Ramsbury, on May 22nd, 1842. When three years of age he nearly lost his life, having been kicked by a horse he had tried a new whip on. The tell-tale scare remains on his forehead to this day.

In 1845 he had the great misfortune to lose his father. He was educated at a school kept by the famous Tommy King, which has been a great advantage to him. When a Total Abstinence Society and Band of Hope was established in Ramsbury he was among the first to join, and has continued his membership ever since.

For some time the family removed to Ragburn Farm, during which time he was a scholar at our Witcha school, Ramsbury. Our brother gave himself to God in his seventeenth year,

He at once joined the church and found his sphere of labour in the Sunday school, having filled the office of secretary and vice-superintendent. He became superintendent in 1897, which office he still holds.

Of all his work in the church none is so delightful to him the Class meeting, and his love for it has grown with the years.

For close on forty years he has held the position of leader, and it is a very rare thing for him to be absent from a meeting.

His is no stereotyped method of conducting, but varies with the needs of the case, and with Brother Hobbs variety and freshness is a matter of great consideration. This, with the soul of goodness, has made him a worker that needeth not be ashamed.

His domestic relations are of the happiest. Two sons are officials in our church and are rendering splendid service. We hope for our brother many years of useful work in the church he loves so well.

Thomas was baptised on 19 June 1842 at Ramsbury, Wiltshire. His parents were George Hobbs and Ann Smith. After George died in 1845, Ann married Job Rosier, a labourer.

Thomas earned his living as a boot and shoe maker.