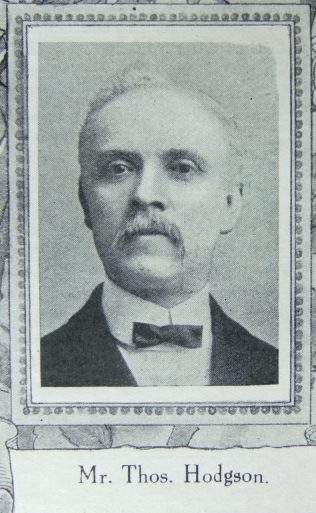 Mr. Thomas Hodgson has been one of the Stewards of the Hetton Circuit for many years. Born at Shildon on November 23rd, 1862, he is an example of the strong men produced by Primitive Methodism in the great mining centres. He was converted at the age of seventeen during a revival conducted by Mr. John Bainbridge. Removing to Easington Lane in 1884, he became a teacher and Local preacher, and for twenty-five years he has been Society Steward and Treasurer to the Trust. Intelligent, shrewd, generous and spiritually minded, he is deeply interested in all forms of work for the betterment of humanity. But it is in the financial department that his special abilities are most strikingly revealed. His accounts are presented with clearness, accuracy and despatch. He is keenly alive to the vital connection between financial and spiritual success, and works heartily for both.

Thomas married Mary Jane Scott (abt1852-1910) in the summer of 1887 in the Houghton-le-Spring Registration District.

Thomas worked as a coal miner rising to become a deputy overman. Mary Jane was a dressmaker.

Thomas died in the spring of 1913 at Easington Lane, Co. Durham