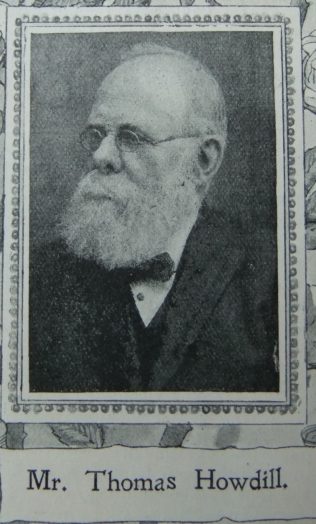 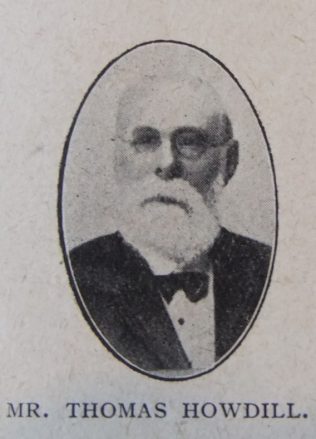 The Circuit Steward of Leeds Third Station, now Rehoboth Central Mission, has held that office from the inauguration of the Mission, a though now reckoned among the fathers he possesses a wonderful juvenility of spirit and outlook.

In the forward movement he has rendered valuable assistance, and unlike many of his years, he has never thrown a wet blanket around the enthusiasms of youth, or for a single moment retarded the progressive spirits.

Mr Howdill is a man full of originality, with his own way of looking at things and his own inimitable way of expressing his ideas. In his profession as an architect he has designed many useful churches for Primitive Methodism. He is more widely known as the treasurer of the General Chapel Fund, but nowhere are the man and his work appreciated more highly than in the circuit where he has rendered such long and useful service.

Thomas was born in 1840 at Tadcaster, Yorkshire, to parents Joseph and Jane. Joseph was a farmer.

Thomas was baptised on 27 September 1840 at Tadcaster.

Thomas began work as a joiner and carpenter. It was not until the 1881 census that he is described as an architect.

Thomas married Mary Elizabeth Barker (abt1827-1908) in the summer of 1862 at Leeds, Yorkshire. Census returns identify one child.