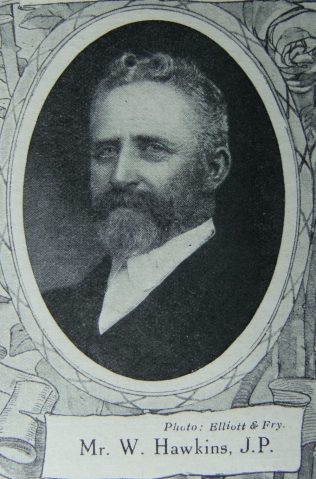 The Chancellor of Peterborough First is a self-made man. Starting his life in humble circumstances, he has by industry and integrity attained a position of great responsibility. Converted in 18979, at Stanground, he threw himself into religious work, and as teacher, School Secretary and Organist soon revealed the depth of his religious convictions. As a Local Preacher he is most acceptable, often being in demand beyond the bounds of his own Circuit. Our brother is much beloved and greatly respected. He makes an ideal Chancellor, courteous and genial in manner, thoroughly understanding his duties, guarding the interests of both Circuit and ministers, and generously supporting our institutions. As a public man he is trusted and honoured. He was the first Chairman of the Fletton Urban District Council, and is still a member. He was made a County Magistrate in 1907.

Mr. Hawkins has an excellent wife, who shares her husband’s activities.

William was born abt 1854 at Eye, Northamptonshire.

William was circuit steward for twenty-three years in total. He was a trustee for eight churches.

William married Ada Knowles (abt 1864-1903) in the summer of 1896 at Peterborough, Northamptonshire. Census returns identify one child.

William married Henrietta Lowden (b abt1871) in the spring of 1908 at Peterborough, Northamptonshire.