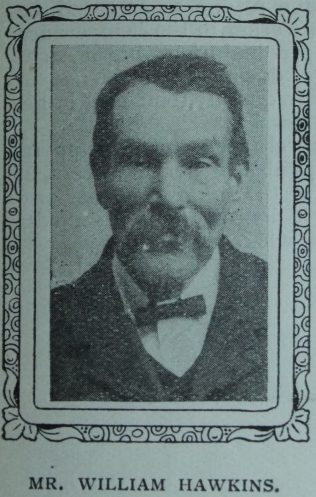 Transcription of ‘Sketch’ in Christian Messenger

Mr. William Hawkins began his career as a local preacher in Pillowell Circuit when it was large and extensive, then including Lydbrook, Lydney and Monmouth Circuits. He has frequently undertaken very long and most laborious journeys which, together with being a very hard worker in his secular calling, has told considerably upon his physical frame. This, however, he has endured most bravely and with great patience, and when his labours have been blessed with the conversion of souls his cup has been filled with joy to overflowing.

He was born at Whitecroft, in the Forest of Dean, in 1839. His conversion took place in the year 1866, when he joined our Church at Pillowell.

In 1877 he removed to Moseley Green, where he has resided ever since, and has been one of the chief factors in establishing a flourishing cause there, and from the very commencement has been and still is class leader, society steward and school superintendent.

He is a great believer in the power of prayer and most hospitable in spirit. Ministers, local preachers, and others have always been heartily welcomed to his home and made comfortable. He is truly a man of God – a Primitive Methodist to the backbone – and is a most conscientious man in the fulfilment of his secular and religious duties. He is now over sixty-eight years of age. There are indications that the outward man is perishing, but not withstanding this the inner man is being renewed day by day, so that he is ripening as a shock of corn for the heavenly garner.

I have been unable to identify William and family in census returns. Can anyone point me in the right direction?