Primitive Methodist preacher in Wiltshire for over 62 years 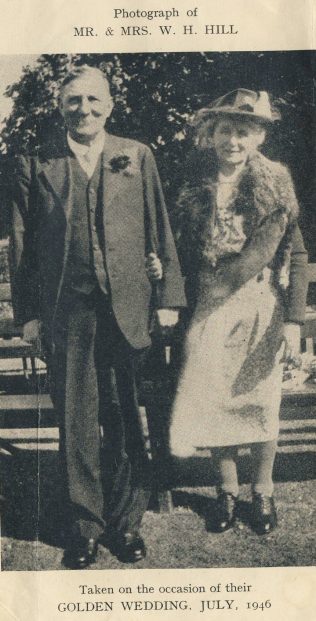 By chance recently I came across a booklet, published in 1948, following the death of my grandfather, William Hill. Throughout his life he was a committed Primitive Methodist and and campaigner for temperance.  He died a year before I was born so it was good to read the description of who he was. Here are some of the tributes.

“William Henry Hill was born at Stratton St. Margaret, July 6th, 1870. He died at Swindon Victoria Hospital on May 14th 1948. With the exception of a short time when, as a lad, he lived with his grandfather in Swindon, he resided in his native village for the whole of his life. He was in business in Stratton for 60 years, as smith, wheelwright and saw mills proprietor, and was a lifelong Methodist. For 60 years he was a local preacher and known far and wide as a temperance advocate. He served for a long time on the Stratton St. Margaret Parish Council and was a trustee of the Methodist Church, Lower Stratton. He leaves a widow, four sons and two daughters – Bramwell, Howard, Wycliffe, Ewart, Frances, Muriel (Mrs. T. R. Barnes) – and two grandsons, John Hill and Berkeley Hill.

Something of the place he held in the hearts and minds of a varied circle may be found in the following tributes to his memory which are printed in response to many requests and as a token of acknowledgement for many letters and messages of sympathy received by Mrs Hill and family since his passing.

He passed with a full life behind him. He was one my early friends. I think of us in Stratton days as youths together (1900). We loaned books. He got me my first bicycle. We shared Circuit knowledge and Circuit service in the Methodist Church. He gave his family the right kind of family life, a good Circuit man, devoted, loyal. I thank God for every remembrance of him.”

STOOD FOR THE BEST THINGS

He lived a good life – stood for the best things. His memory is sweet. It was my pleasure to meet him just once, but how close together we came! And the eyes that lighted up with humour made a deep impression on me. Time ! gentle hands will bring you many flowers and fragrant remembrance of him.

Western Temperance League, Bristol, of which Mr Hill was a member for 50 years.

We place on record our sincere regret at the passing of Bro. W.H. Hill who has served this Circuit as a Local Preacher for 62 years. As a youth he preached his first sermon in the Primitive Methodist Church which preceded the present one at Stratton St. Margaret. It is impossible to estimate the labours involved in fulfilling appointments over such a long period, often over bad roads and in stormy weather, and, for so many years, without modern means of transport. He was never tired of journeying to the village causes, though he must often have been weary through his exertions. He took the appointment given him without demur and has a record of faithful, regular and punctual service.

Knowing himself to be saved from sin and the world he had a firm belief in the power of Christ to save all who would come to Him in penitence.   He was a good man, a man of prayer and faith. He was urgent for the coming of the Kingdom and felt that those who had greater gifts and opportunities than his own should prosecute their work as if there was not a moment to lose – and he was right, for there is not.

He was a convinced abstainer and his advocacy of total abstinence did not stop at speaking about it, but it took a more practical form, and many are abstainers today through his personal contact and influence. We can ill spare such fine and consistent service as he has rendered our Circuit. We shall miss him from our fellowship and deliberations. His sons continue the valiant fight. To his widow and children we extend our deepest sympathy in the great loss they have sustained.

In addition to the extract here, there were also tributes from Pastor Carver of Coronation Temple, Swindon; Rev J.C. Ryan, Bishop of North Madras, India, founder of the Evangelical Missionary Society; William Robinson J.P. who headed his piece Bro. Willie Hill – I never heard anyone call him that; and A.J. Williams of Teignmouth, formerly of Stratton St Margaret.  All of them focus on the faith that he held and how his life modelled it.

To find a picture of William’s wife Lucy as a younger woman, click here.