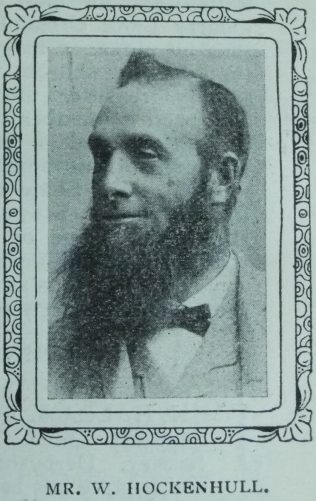 Few local preachers with whom it has been our privilege to be associated have been more devoted in their work than Mr. William Hockenhull, of the Nantwich and Burland Circuit. Though fifty-eight years of age our brother is always at his post and takes an average of eleven Sundays a quarter. While nothing is neglected at home he often takes services for other Circuits. He puts conscience into all his work and whatsoever he finds to do he does it with all his might. He is “diligent in business, fervent in spirit, serving the Lord.” Though belonging to the old school and from the Methodist standpoint thoroughly orthodox, the New Theology has no attraction for him. In his work as a local preacher his rich religious experience and intimate acquaintance with the Word of God are of immense value to him. He has been delegate to District Meeting and Conference, and for many years has been treasurer of the Equalization and Furnishing Funds. A generous supporter of all Circuit and Connexional Funds, a loyal and devoted Primitive Methodist, and well acquainted with the rules and usages of the Connexion, he is of the type of men who have so largely helped to make Primitive Methodism. A local preacher, leader of the largest class in the Circuit, and Circuit secretary, his ruling passion is the salvation of souls.

William was born in 1845 at Alkington, nr Whitchurch, Shropshire, to parents William and Martha. William, senior, was a farmer.