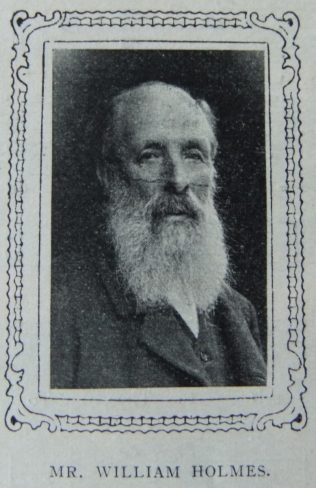 If ever it be true that the Methodist class meeting is neither as popular nor as useful as beforetime, there are exceptions, and one of those exceptions is the Darsham society class, of which William Holmes, assisted by Mrs. Aldrich has been the leader for forty-seven years.

Born at Walpole in the Wangford Circuit, our friend is now seventy-four years of age. Converted in early manhood, Mr. Holmes united with our people at St. Lawrence.

After taking to himself a wife, he removed to Darsham, joined the Church, and shortly afterwards was appointed class leader, and has retained the office ever since. Gradually the society has grown in numbers, strength and influence, and is now one of the best village causes in the county; the members number forty-seven, and the contributions to the Circuit Fund for the present quarter are over £20.

Mr. Holmes is intelligent and observant, quaint, original, and a good conversationalist. He has delightful reminiscences of those who were converted in and through the class meeting, and revels in stories of the past.

In addition to the duties of class leader, Mr. Holmes assisted in the superintendency of the Sunday school for many years. Now younger men and maidens have relieved their elders from some of the offices they of necessity filled so long.

Of course, our old friend is a local preacher, too. In simple speech and homely style he tells others what he himself knows about Jesus Christ, and not in vain. He must have travelled thousands of miles and preached thousands of times to the congregations on the Wangford Circuit; and he is still able and willing to preach every Sunday if need be.

We thank God for the abundant service our old friend has rendered to the Church.

William was born on 26 September 1835 at Walpole, Suffolk, to parents Thomas and Marion. He was baptised on 8 May 1836 at Walpole Independent Chapel.

William began his working life as an agricultural labourer, but by 1881 he had become a threshing machine proprietor.