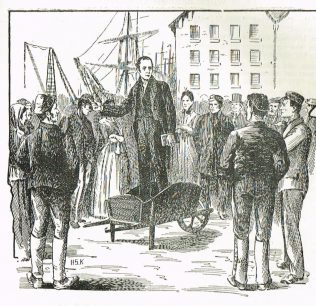 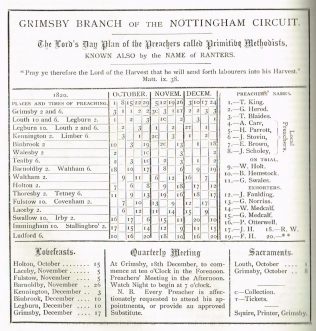 On 31 October 1819, a Primitive Methodist missionary entered Grimsby, a town in Lincolnshire whose population had recently increased from 1,000 to almost 3,000 people, thanks to the opening of the new harbour and docks. Thomas King was a stranger to the town, and as he walked down the main street he looked for a place to preach in the open air, on this very cold day. He came to a piece of wasteland, and seeing a wheelbarrow, stepped into it, took a ‘sevenpenny’ hymn book out of his pocket, and began to sing. Soon a crowd had gathered, who ‘listened with astonishment to the words of this man of God’.

William Holt was one of those in the crowd, and afterwards he walked up to the preacher, shook him heartily by the hand, and invited him to his farmhouse at Clee.  He had recently heard a Primitive Methodist missionary in a nearby village, and invited him to preach at Clee.  Arriving at the farmhouse, Thomas King found a crowded house as a service had been announced. Mrs Holt showed the preacher the dairy, and urged him to get some refreshment, as he must be very weary, before he found himself in an improvised pulpit.

A small society was established in Grimsby, first worshipping in a stable, and later a warehouse as numbers grew.  The importance of William Holt’s leadership cannot be underestimated. Rev Joel Hodgson said of him, ‘In the day of small things it was no doubt a recommendation of the new society that farmer Holt united with it. His social position, force of character, and religious zeal, placed him for many years in the front rank of the local preachers and leading officials of the Grimsby Circuit.’  He preached to crowds of people at camp meetings, became the leaders of the first Class Meeting in Grimsby, which involved travelling a considerable distance each week. His house was always open to provide hospitality for preachers and others, and died at the ripe old age of 86.

In 1821, William Holt was chosen as the lay representative from the Grimsby Circuit to the Primitive Methodist Conference which met in Tunstall from 2-10th May.  Thomas King was the ministerial representative, and the two friends walked the whole way, travelling through Lincolnshire, Nottinghamshire, Derbyshire and Staffordshire. ‘When near their destination, they paused, and looking across the valley, Mr Holt said: “I feel tired, Tommy, I don’t know how thou feels.” “O”, said Mr King, “I feel that I should not mind walking back again”, and walk back they did, after the Conference had closed its sittings.’

The article quotes from a biography of William Holt by Rev Joel Hodgson, but I have not been able to see a copy.