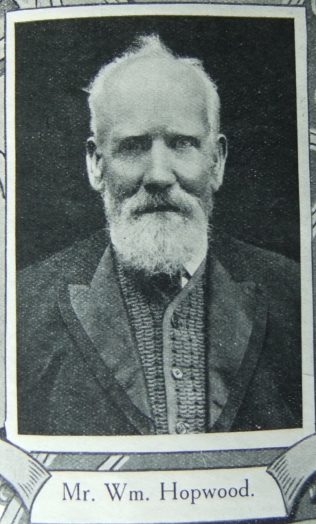 Mr. Hopwood was born in the village of Holtby in 1841. He joined the Church when 22 years old, and twelve months later became a local preacher. What this step meant and still means to many of the outposts of our Church will never be fully known. Prior to the division of the York Circuit, Mr. Hopwood held all the responsible offices, with credit to himself and much blessing to the churches.

About 24 years ago he and his family removed to the village of Heslington, where they have been a tower of strength to the Church. As Circuit Steward, local preacher, and Class Leader, he has exercised a healthful influence over the churches of the York 2nd Circuit. He is a devoted son of the Church and a true friend of the ministers. He has frequently represented his Circuit in the District Synod, and upon three occasions has been elected delegate to Conference.

William worked as a greengrocer in York before moving to Heslington. There he was described as a market gardener in the 1891 census and thereafter, a farmer.