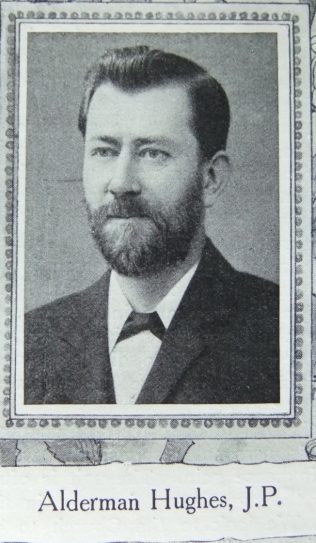 We are indebted to the village of Ipstones, on the Cheadle Station, for the Circuit Chancellor of Manchester 10th. He came to Pendleton in 1876, having paid his class pence from a lad, and having joined the Society class at 13 years of age. Mr. Hughes found the Pendleton primitives on a cottage. To-day the splendid hall at Eny’s Street, in connection with which there are 700 Sunday School scholars, stands as a monument of his untiring zeal and generous gifts. Of that school he has been superintendent since 1882. Salford Council claimed him in 1891, and raised him to the aldermanic bench in 1908, while the dignity and duties of a J.P. were accepted in the same year. We are justly proud that one so honoured should value so highly his carefully treasured class tickets dating back to 1872, specially when we know that the last is prized as much as the first. He is a loyal Primitive Methodist and a devoted Christian.

At the age of nine, William began work on a farm. Aged fifteen he moved to Manchester where he worked as an errand boy. He then obtained employment at Victoria Station before becoming a labourer with Salford Corporation circa 1879. The 1881 census records William working as a commercial traveller. By 1891 he had established himself as undertaker.

William served on Salford Council for about fifty years. He was elected Mayor in 1919.