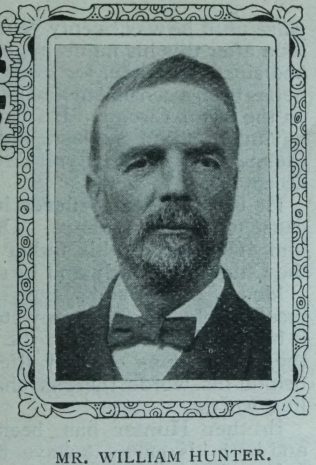 Village Primitive Methodism has scarcely produced a sturdier son than William Hunter. Born into a thorough Primitive Methodist home on November 20th, 1842, at East Winch, in the Lynn Circuit, he has in some sense, retained his connection with the Circuit until this day.

Among his earliest recollections are the visits of ministers and local preachers to his father’s house. He remembers how as a child Rev. Richard Howchen took him on his knee, and how as a boy he would say that he should be a preacher. His own prophecy has been grandly fulfilled.

While always inclined towards Christ and in some way associated with His Church, his conversion did not definitely take place until he was twenty years of age. Very soon after this his name appeared on the plan and since that time, for over forty years now, he has been a consistent and loyal local preacher on the Lynn Circuit. He can boast of never having a wilful neglect, and although past the meridian of life, Lynn Circuit has no more acceptable preacher.

He is a practical believer in supporting the cause with his substance. One lesson taught him effectively by his father was to support the Church regularly and by self-sacrifice.

Men of our friend’s type are of solid and incalculable worth to any station. Whether it be as he is heard from the pulpit or met in the transactions of daily life, one feels that behind his words there is character and sterling worth.

Brother Hunter has been married twice and both his partners have been sharers and helpers in his work for God. Four of his sons are primitive Methodist local preachers, and upon their lives can be seen the stamp of their father’s personality.

Many have been won by him for his Master, and our prayer is that the future may contain even more brilliant victories than the past has brought.

William was born on 20 November 1842 at East Winch, Norfolk, to parents George and Phoebe. George worked the land.

William married Mary Ann Harris (abt1855-1945) in the summer of 1896 in the Headington Registration District, Oxfordshire.