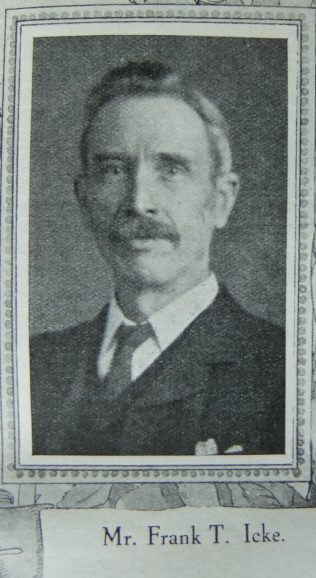 Mr. Frank T. Icke, of Wem Circuit, is an unobtrusive, quiet personality, yet a valuable and efficient Steward. Born at Worsley All Stretton, Salop, of godly parents, his father being a Wesleyan local preacher in the Ludlow station, he went out when very young to Natal and became a Sunday School teacher in the Wesleyan West Street School, Durban, afterwards rendering periods of splendid and faithful service at Pietermaritzburg and Johannesburg, South Africa. He has the happiest recollections of the ability, character, conduct of the ministers and officials out there. He returned to England in 1889, joined our Church at Wem in 1890. Nothing gives him greater delight than to see the work of God progress in the Circuit. He is a reliable, regular, punctual, intelligent, up-to-date teacher, who instructs, interests and influences the mind and heart of the young.

Frank was born abt 1861 at All Stretton, Shropshire, to parents Samuel and Anne. Samuel was a farmer.

Frank worked as a saddler.