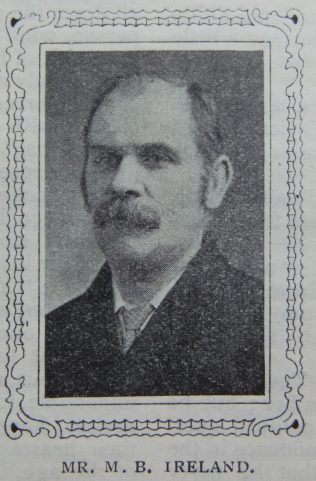 Mr. M.B. Ireland, the Society Steward of our Jubilee Church, Scarborough 2nd Circuit, hails originally from Filey, and is one of those rare men who can speak of a life-long attachment to religion. Reared in his early youth by his uncle, a sturdy old Methodist of the Filey Circuit, and in whose house the preaching services were held, he was early won to the side of goodness; he has vivid memories of those early pioneers, and the power attending their services, and he is never tired of testifying how religion stole in upon him and captured him by living with those who were religious.

He has been a member of our Jubilee Church for 25 years, in the school for 24 years, and is now one of its honoured Superintendents; he has been Treasurer of the Trust Estate 11 years, Society Steward 9 years, and a Class Leader of one of the largest classes for 16 years. In these various departments, he has been most successful, willing and strenuous service has been cheerfully rendered, and he has done very much to make possible a greater success in future days. In the business meetings of his Church he is always on the side of progress; he has no sympathy with the narrow outlook of the pessimist who decries storm, clouds and thunder in the path of every new project, but while using every caution and care will not lightly give up a conviction that he believes to be of God and for the good of the Church.

But the greatest force of our brother’s life is the spiritual; his long connection with the school and the class-meeting is sufficient to demonstrate that, but his presence in the Sunday evening prayer meeting, and especially his earnest prayers, have helped many an undecided seeker to dedicate himself to God.

Mr. Ireland is in the prime of life, and has many years of service before him.

Martin was born in 1856 at Flixton, Yorkshire. He was brought up by his uncle, Moses Ireland, who worked the land.

Martin began work on the land, but by the time of the 1891 census he was established as a grocer in Scarborough.