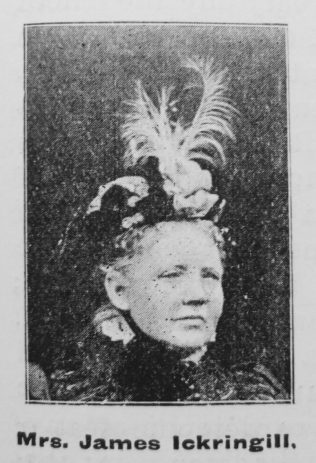 Transcription of Obituary in the Primitive Methodist Magazine by C. Kitchen

“Who can find a virtuous woman? for her price is far above rubies. The heart of her husband doth safely trust in her, so that he shall have no need of spoil. She will do him good, and not evil all the days of her life.” “She looketh well to the ways of her household, and eateth not the bread of idleness. Her children arise up and call her blessed; her husband also, and he praiseth her.” Prov. xxxi, 10-12 27-28. Such is the tribute that may be paid to Mary Ann Sophia Ickringill, the beloved wife of James Ickringill, Esq., of Oakworth Road House, Keighley, and Sunset House, Heysham, Morecambe, who died January 23rd, 1903. She was the second child of William and Dinah Naylor, and was born at Lane Ends, Oakworth, June 5th, 1841. She was blessed with a pious godly mother, who took her when a girl to the house of God, and to the class meeting, and though her husband was not a professing Christian she reared a family altar and prayed with and for her children. No wonder, therefore, that Mrs. Ickringill grew up in the church as one of God’s own children, rather than passing thro’ a severe ordeal of conviction, contrition, and repentance. As the opening flower her nature opened to those gracious influences, ever afterwards showing its beauty and shedding a constant pervasive fragrance. She was not born into a position of affluence, she was one of a large family and often in her girlhood had to struggle hard to help her mother make ends meet, but she cheerfully did her part and when later years brought an improved temporal condition, the affection between mother and child grew in intensity. How much Mrs. Ickringill’s subsequent life owed to her true and sainted mother’s influence and teaching no one can tell. She went to work when only seven years of age, and a year after was taken on full time. When her parents removed to Keighley at that time, her mother joined our Queen Street Church, (now Alice Street), and so did her daughter whose unbroken membership with our union has covered a period of over fifty years.

Thirty-three years ago she became the wife of Mr. James Ickringill: their married life has been one long day of joy and gladness. I don’t mean that no ripple has ever appeared on the sea of their domestic life, that no shadow has ever darkened the home, and that no struggle has ever fallen to their lot; but contentedly they have shared the burdens of life, overcome its difficulties, and deservedly won their way to a position of affluence, a result in no small degree due to Mrs. Ickringill’s wifely counsel, motherly wisdom, and high Christian character. We have often heard her husband say “I owe everything I have and am socially to my wife.” She was very methodical in her habits, and excelled in the orderly conduct of her household affairs. Into all her husband’s projects she heartily entered, and though she did not always see the way to success she thus helped him to succeed. Love, real and deep, reigned quietly in the home circle. Forbearance, faithfulness, and intense religious fervour, were prominent characteristics of our dear sister’s home life. What a priceless legacy to leave behind – the legacy of a gracious character, a lofty example and a noble life! Our church at Oakworth Road Mission Hall, in the Keighley II. circuit will sadly miss her. She has been a faithful member with us from the beginning. She loved our Zion: especially was she fond of the class meeting. Many, many times have our hearts been blessed as she has told the simple story of her love for Christ and the Church. Though dif?dent, she had a true religious experience, and she gave it. Her generosity for God’s cause is well and widely known. Her last public appearance was in connection with a tea she and her husband gave in the interest of our Parliament Street Church, Morecambe, while her last attendance at the Mission Hall was to distribute the prizes at the adult bible class. Her kindly smile, her cheery words and helpful sympathy, as well as her generous gifts in time of need will be greatly missed. Primitive Methodism will remember for many a day how generously and in what princely fashion she and her husband provided for the reception of the delegates of the Bradford and Halifax district meeting of 1902. She had hoped to be present, but was prevented by a severe attack of illness from which we had trusted she had recovered, and we were cherishing the hope that she would be spared to us for many a year when the fell disease from which she has suffered for 30 years developed other and serious complications. In her weary illness, as in her busy and useful life, she has found the promise true, “My Grace is sufficient for thee.” No murmur escaped her lips. As the shadows of the long night gathered about her she said, “I have had a happy life, very much brightness, very much sunshine, and now that I am ill I do pray I may have patience, I don’t want to murmur, I can say ‘though I walk through the valley of the shadow of death I will fear no evil, for thou art with me, thy rod and thy staff they comfort me.’ I should like to get better, but still God knows what is best, I will leave it with him, and say ‘Thy will be done.”’ The Rev. Mr. Dowson says he found her suffering from pain and exhaustion “but her face brightened as I read to her the 23rd Psalm; she knew the verses and was comforted,” and so mortal life calmly, quietly ebbed away until Friday morning, January 23rd, 1903, when she languished into the life eternal.
“Twilight and evening fell,
And after that the dark.
There was no sadness of farewell
When she embarked.”

She has “crossed the bar,” and now sees her “Pilot face to face.” The interment took place on Jan. 26. A full choral service was held in the Mission Hall, the place being suitably draped in mourning, and the people everywhere showing signs of tender regret. The following brethren officiated: Rev. E. Dalton (Leeds); Isaac Potts (Filey), who gave an address, J.H. Hirst (Keighley), G. Newton and F.E. Thistlewaite (Circuit Ministers), and Mr. C. Kitchen. The choir sang at the grave, “Rock of Ages.” On Sunday, Feb. 1st, memorial services were held at the Mission Hall (morning) and West Lane (evening), Rev. G. Newton preached from Rev. 14-13. Mr. C. Kitchen gave the memorial address, and the Rev. J. Leadley, of Dewsbury, said a few appropriate words. At these services, special anthems and solos were rendered, and favourite hymns of our lamented sister were used.

Many letters of sympathy and appreciation have been received. The Rev. J. Reavely, of Hereford, says: “When I entered the Keighley 2nd Circuit many years ago, she gave my dear wife and me such a cordial and Christian welcome, that from that very day she placed herself in the affection of our hearts, and in the long years that have intervened, dear Mrs. Ickringill has always been one of the kindest and truest of friends.” Rev. E. Dalton says “My first introduction to her was 16 or 17 years ago, in connection with a round of missionary meetings, when I made my home with them. I found a home from home; what struck me most was her beautiful, gentle and devoted spirit. Religion seemed to enter into every detail of her domestic life. There was an entire absence of anything like sanctimoniousness; you were conscious that you were in the atmosphere of beautiful, simple and yet earnest piety. I prize it among the most valuable of my earthly treasures to be in any sense counted her friend.” Rev. W. Thoseby, of Knaresboro’, speaks “I do not know, for some things, whether I shall look upon her like again.” Rev. W. Travis (Sheffield) testifies “Seldom has it been my privilege to meet with a person so blameless in character and so genuine in life.” Mr. E. Goldthorpe, Leeds, says “ Her devotion to the services of God, so unsel?sh, so thorough: her pleasant cheerful countenance, simple trust in God, were to me cause for admiration and a true source of inspiration.” Rev. Geo. Bicheno testifies (speaking of Proverbs, 31st chapter) “That catalogue of virtues and graces which the chapter contains, describes her well in her domestic life: so dignified in its simplicity, so gracious in its generous hospitalities, so thorough in its service, and so lavish in its love. As for her work for the Church ‘Give her of the fruits of her hands, and let her own works praise her in the gates.’ ”

May we meet her again in the morning.

Mary’s birth was registered in the second quarter of 1842, not 1841 as recorded in the obituary. She was registered as Sophia Mary Ann Naylor. Her father, William, was a stone mason.

The 1851 census records Mary as a worsted spinner.

On his death James left an estate valued at £89k.