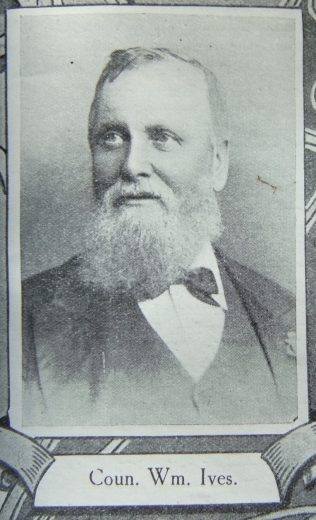 Mr. Ives is one of the oldest and staunchest of our Metropolitan officials. Upwards of fifty years ago he removed from Northampton to London. Of the early years of our struggles as a Church in the town of Northampton he has vivid recollections and tender memories. Coming to London, he immediately identified himself with our Church, and none are prouder of the results of the long and arduous years than he.

His connection with New Camden extends over forty years. To his Church he has ever been devoted. To his influence our commanding position in the neighbourhood largely is due. His generosity to his poor relations and others has been constant and considerable.

He is a man of public-spiritedness, having served on the Borough Council continuously for nearly forty years. But neither his public service nor business prosperity has weaned him from his loyalty to God, nor diminished his devotion to his Church.

William was born on 19 February 1831 at Northampton, Northamptonshire, to parents George Ives and Charlott Kent. George was a shoemaker. William was baptised on12 April 1832 at St Sepulchre, Northampton, and again on 25 June 1837 at All Saints Wesleyan Methodist Chapel, Northampton.

William followed in the footsteps of his father as a shoemaker. When established in London the emphasis in census returns was on boot-making.