After the Long, Long Day 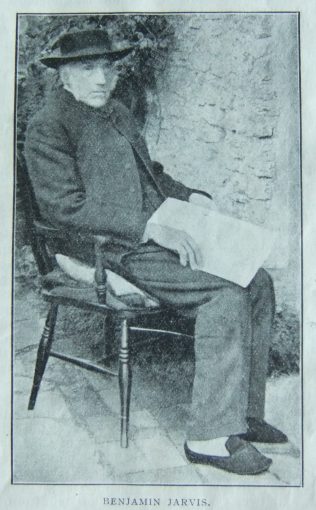 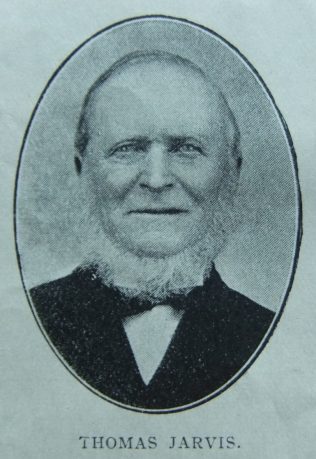 Transcription of ‘Sketch’ In the Christian Messenger by J N Bailey

BENJAMIN JARVIS was born, and has lived his long life in Farthinghoe, a village five miles from Banbury Cross, in the very heart of rural England. He is considerably over eighty years of age and few men of his type are more interesting than “old Ben” as he is familiarly called.

Mr. Jarvis is the oldest local preacher on the Banbury Circuit plan. He was converted at twenty, and soon began to preach and has been a preacher ever since, a period of sixty years. The first sermon he heard in the Farthinghoe chapel was delivered by the late George Warner, who went through this part of the country like a flame of fire. Benjamin’s father was a hawker. He had five children, and unfortunately died early leaving his widow and four sons and one daughter to carry on the business. Ben spent two years at school in Marston-St.-Lawrence with William Goldby, a pensioner who lost an arm at Waterloo. This village pedagogue was a Primitive Methodist local preacher, who travelled many miles to the surrounding villages on Sundays preaching the everlasting gospel to the benighted people.

When eighteen years of age, Ben became a groom, staying in that occupation until he was thirty-two. He then learnt to drive an engine and for eight years had control of a threshing machine, and for another ten years a ploughing engine. He afterwards worked as a farm labourer until he was sixty, when a serious accident incapacitated him from active labours. This was his third serious accident – each time being thrown from a rick. The first time he fell with a ladder, and burst a blood vessel in his chest. His second illness lasted three years. He says he tried the doctors until he was tired of them, and one night in sheer desperation he said to his wife “Missis, I’ll have no more doctors I’ll try the Lord!” He knelt and prayed and from that time his pain left him and he went back to work. That was real “Faith Healing.” His last accident resulted in dislocating his hip-joint, breaking his thigh, smashing his shin-bone and cutting his back. This accident nearly cost him his life; when recovering, however, the doctors used to take persons to his bed-side and show him off as a kind of miracle. One day the doctor said to him, “Well, Ben, that old leg of yours will never be any good to you, you will never walk again.” “Ah, doctor!” replied Benjamin, “things impossible to men are possible with God.” From that moment the hero of faith felt that he would walk again, and he did, and now, twenty years after, though lame, and with disjointed hip, he gets about and goes to chapel and occasionally goes to Banbury market five miles away. He now busies himself with carving with his pocket knife little cabinets out of boxes bought at the grocers. Space prevents me giving Ben’s faithful and heroic services for sixty years to the cause of Christ as a Primitive local preacher He now lives quite alone, his wife having died ten years ago. It is one of the greatest joys of one’s life to be the almoner of the fifteen shillings per month from the Aged Local Preachers’ Fund. And David Lloyd George will probably never know, “till the day dawn,” how this aged servant of God – this captain of industry, in one of the most secluded spots, “pushed aside from the march of armies and the merchandise of nations,” in the very heart of rural England – thanks God for his old age pension, and prays every day for the doughty little Welsh Chancellor of the Exchequer. Benjamin Jarvis is perfectly happy, and ready any moment to mount the steeps of light in the chariots of God, when they shall rein up at his humble cottage doorway

Though possessing the same surname as our good old friend, Thomas Jarvis can claim no relationship with him. Thomas resides in the picturesque village of Warmington, about two miles from Edgehill in Warwickshire, where the celebrated battle was fought between Cromwell’s forces and the Royalists.

This old age pensioner was born on the twenty-third of September, 1828, and is now therefore in his eighty-third year, and is a hale, hearty old gentleman, taking appointments in the Banbury Circuit and elsewhere. when a child of eight years old he drove horses at the plough for one and six per week. Returning home hungry, he dined on potatoes and turnips, and for supper he had barley dumplings. This was even before the “hungry forties.” He was one of twelve children. His father died suddenly in the hayfield, with his mother raking after him, and thus leaving a widow and twelve children totally unprovided for. Thomas started out in life to earn his own living as a sawyer at the age of fifteen. He was converted and joined the Primitives in 1848, when he was twenty years of age. The human instrument of his conversion was John Eyre, of Rugby Circuit. The next year, 1849, his name  appeared on the Banbury Circuit plan as a local preacher. This was just seven years after the Circuit was formed. Thomas Jarvis has therefore been an active local preacher for sixty-one years. He says that his home has been open to the preachers for sixty years. He married a wife, he tells us, “who was the best woman the world could give a man.” She was converted at twelve years of age, and after being a member for fifty-eight years, she went “to the glory land” in 1890. He says, with pardonable pride, that the first minister he entertained in 1849 was the Rev. Samuel Turner. He has taken the Primitive Methodist newspaper since its commencement and the connexional magazines for over half a century. He has walked many thousands of miles during his long local ministry to preach the Gospel of his Saviour. He says, “I do not wish to boast, but while working in Coventry I have many times walked home twenty miles on a Saturday – then twenty-two miles there and back to Brailes to preach on the Sunday – then back twenty miles again to work at Coventry on the Monday.”

Ten years ago, while attending a preaching appointment, our friend met with a serious accident, breaking his leg, which necessitated his going to the hospital and having it amputated. He has now an artificial leg and foot. In the early days he had much social persecution from the parson and the parish authorities. First they took away his allotment, then they summoned him for church rates, but this doughty ancient passive resister suffered them to take his clock and armchair rather than pay the unjust rate. Since then the pendulum of time has turned in his favour. He has been guardian for his parish and also overseer for several years, and filled every office which the parish could give him. When the Education Act of 1870 was passed, he immediately became a member of the first School Board, and was re-elected seven times, sitting for twenty-four years, twelve of which he was chairman of the Board. He rejoices in the fact of knowing Mr. Joseph Arch and the late Mrs Leuty – Mr. Arch’s daughter – and tells us with what delight he has entertained them and attended meetings with them. He enjoys the old age pension and the Primitive Methodist Aged Local Preachers‘ Fund allowance.

Benjamin Jarvis was born abt 1830 at Farthinghoe, Northamptonshire, to parents Edmund and Elizabeth.

Thomas Jarvis was baptised on 5 October 1828 at Warmington. His parents were James, who worked the land, and Mary.

Thomas earned his living as a sawyer and carpenter.

Thomas married Sophia Blake, nee Taylor (b1855) in the summer of 1893 in the Witney Registration District, Oxfordshire. Census returns identify one child.