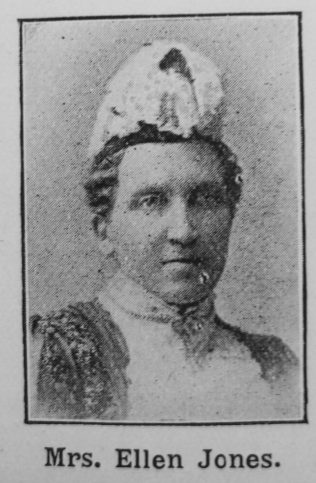 Transcription of Obituary in the Primitive Methodist Magazine by J. Travis

Our departed sister, the beloved wife of Alderman John Jones, of Chester, is worthy of a place amongst the excellent women whose memory is embalmed in the pages of THE ALDERSGATE, both on account of her personal character and her personal service. She was born in the city of Chester, June 7th, 1847, married in 1868, to him who now mourns her loss, and passed from earth to heaven on March 27th, 1901.

She was highly favoured in a religious sense all through her life. Her parents were Christian people, and took a great interest in the life and work of our church. When at the age of fifteen she lost both her father and mother, and came under the care of brothers and sisters, her spiritual as well as her material interests were considered, and in her marriage she was united to one of the most devoted and loyal local preachers our church in her native city has ever known.

The trend of her life from childhood was religious, and in her sixteenth year, at her own bedside, she definitely and willingly surrendered herself to Christ.

Her life was in no sense eventful, or sensational. She was one of those women who by a childlike, cheerful faith, by an unaffected, harmonious Christian character, and by countless unobtrusive ministries, have rendered more effective and more lasting service to the Church than many who have been more prominent in the public eye, and whose full worth is not realised until they had passed away.

It was in her home she shone most purely and most conspicuously. People who had no acquaintance with her home life did not know her at her best. She was a charming hostess, so unostentatious, and yet so generous, so considerate, and so kind. She had a wide circle of friends who will never forget the hours of pure enjoyment they have spent under her hospitable roof, and scores of our ministers, during the thirty-three years of her married life have found in her house a happy home when away from home for recreation or for service. “The heart of her husband trusted in her,” and but for her he never would have rendered the great service he has done in tthe Church and civic life. He said to the writer – “During the whole term of our married life she has been a source of help and comfort to me in my Church work, often making great sacrifices in order to enable me to perform the duties laid upon me by the Church.”

Her activity continued to the last. We are afraid that in her zeal she overtaxed her strength, and that while engaged in Christian service she caught cold, which culminated in a severe attack of pleurisy, and in five days proved fatal. Her death occurred on March 27th, 1901, only an hour before the opening of a sale of work, for which she had been helping with enthusiasm to prepare, and at which she was expecting to be a stall-holder. Her remains rest in our little cemetery at Saughall, near to those of her brother, J.P. Moore, one of the finest men we have ever known. “She died as she had lived, a Christian,” and now “dwells in the Eternal Light, through the Eternal Love.”

Ellen was born to parents Joseph Pemberton Moore, a butcher, and Mary Platt.