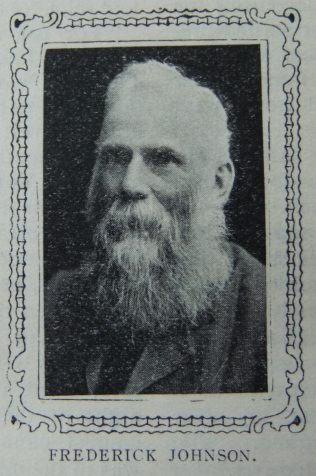 MR. JOHNSON is a son of the soil. Born at Newton, Wisbech, in 1843, he is sixty-six years of age. Beginning as a labourer, he has by industry and thrift won his way to be a successful tenant farmer. His mental equipment was slender, as he began work at an early age, and opportunities for study were rare. Yet, in spite of early disadvantages he is a most acceptable preacher and delights in a good book. At twenty-two he removed to Wretton, where the great change in his life took place.

Here he was converted and at once threw himself into all kinds of religious work. He has been School superintendent (first at Wretton, and now at Upwell), Class leader, local preacher for over forty years, and his zest in the work is as keen as when he began. As a Class leader he is earnest and methodical. Rarely absent (unless through sickness), he can lead fifty persons in as many minutes, and never fails to give encouragement and help.

With the young people our brother is at home, and the schools under his charge have been phenomenally successful. At Wretton, the schools under his superintendency increased so rapidly that that new premises were built, and opened free of debt, while the Anniversaries were the best for miles around.

Mr. Johnson is an ideal Society steward, watching the interests of the Church with paternal regard, and caring for its welfare with deep and growing concern.

Whatever makes for the good of the Church receives his warm-hearted support. He is a loyal Primitive Methodist, and a generous supporter of her institutions, while his home is always open to our preachers.

Frederick was born in 1843 to parents William and Martha. William worked the land.

Frederick died in the spring of 1931 at East Dereham, Norfolk.