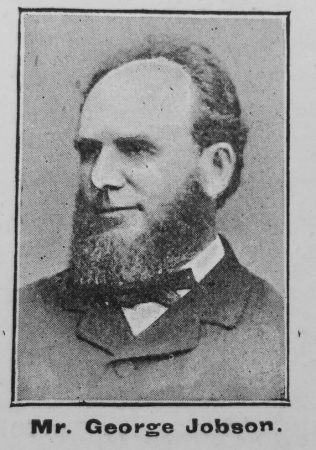 By the death of brother George Jobson, Primitive Methodism on the borderland lost one of its best known and most generous laymen. He was born at Gloroum, near Belford, Northumberland, in the year 1837, and spent his boyhood days in the neighbourhood, attending the services of the Church of England. He removed to Berwick-on-Tweed while yet in his teens, and, being a youth of good character and amiable disposition, he quickly found employment. It was soon after his settlement in the old border town that he came under the influence of Primitive Methodism. Invited by a friend interested in his spiritual welfare he attended a service in our College Place Chapel. The impressions he received on that occasion were deep and lasting. He became a regular attendant at our services, and during a revival mission was brought to the Saviour. It was characteristic of him that he at once confessed his faith in Christ, and became an enthusiastic member of the Church, through whose instrumentality he has been saved. The good work begun in his heart, fostered by diligent attendance at the means of grace, had an abiding influence on his career. In the year 1856 he was appointed a prayer leader, and in 1858 became a full local preacher. For more than forty years he was a familiar figure in the villages of the Berwick circuit, walking long distances and sacrificing much comfort in order to minister to the needs of the various congregations. His sermons on these occasions were remarkable for their evangelical fervour. When he was not planned in the country he gave himself assiduously to the work in the town, teaching the children, visiting the members, welcoming strangers and in various other ways building up the cause. In the evangelistic work of the Church, and in its devotional life, he was deeply interested. The atmosphere of a good prayer meeting was most congenial. He was also closely associated with the official life of the circuit, and filled most of the positions which fall to men of strong personality, including that of Circuit Steward. He was a delegate to the District Assembly on several occasions, and had twice the honour of representing his district at the Annual Conference. Mr. Jobson was a successful business man, and for many years did more to promote the best interests of the company he served than any other representative. He was also interested in public matters, and for some time was a member of the Berwick Town Council. But it was in the Church of his choice that the fruits of his industry and generosity were most seen. He was a ready contributor to the funds, besides being very liberal in his gifts to the poor. His cheery optimism was very refreshing to all who came in contact with him. In this temper be viewed the prospects of the different societies. No weak cause was given up with his approval, and he was ever willing to supply a place when others had failed. It was largely through his initiation and energy that a flourishing society was established at Scremerston, where we have now a good chapel. A former minister, Rev. H. Yooll writes, “The day alone will declare how deeply indebted is Border Primitive Methodism to his zeal and self-sacrifice during so many years and amidst the varied circumstances of its history.” After a brief illness Brother Jobson passed away on January 24th, 1900. His funeral was attended by representatives of the Town Council and other public bodies, and was one of the largest ever seen in Berwick. A memorial service was conducted by the circuit ministers, and a tribute to his worth and work was paid by Councillor G. Green, J.P., Glasgow, an old friend.

George was born to parents John, who worked the land, and Isabella.

The probate record gives the date of death as 19 January 1900.