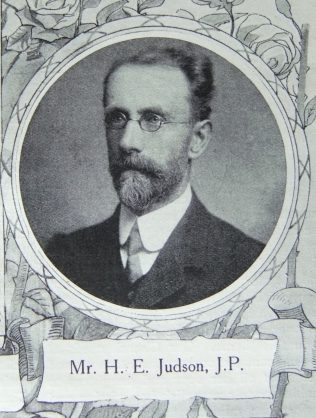 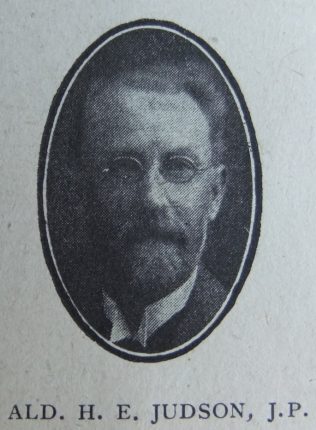 Mr. Henry E. Judson, J.P., of Oldham, is well known through Lancashire, as a loyal Primitive Methodist of the third generation, the son of Rev. John Judson, one of the pioneer preachers in the old Manchester District, and brother of Rev W.D. Judson, of the Marple Circuit. Mr. Henry served for a long and honourable term of years on the Oldham Town Council, and prior to his retirement, aldermanic honours were conferred upon him. He is a capable local preacher, speaking always with graceful diction and spiritual fervency. His services are in constant demand over a wide area. For many years Mr. Judson has been the Steward of Oldham 2nd Circuit, and he takes a living interest in its work and development. He is still in the fullness of his powers, and we earnestly wish for him many more years of growing influence in the church he loves. Too often he has declined positions of prominence, for he is a modest man.

Henry was Temperance, to parents John Judson and Mary Douglas. John was a PM Minister. His brother, William, was also a PM Minister.

Henry spent his school days at Lymm. After school he was appointed to a drapery business at Birkenhead. At the age of sixteen he was persuaded by the appointed preacher at the Camperdown Street Church to assist in the service, but did not understand until he was actually called upon that he was expected to “Say a few words’” After he had recovered from his surprise, and warmed to the theme he had immediately to decide upon, he gave abundant proof of fine preaching talent.

Henry moved to Oldham in 1869 and when the Oldham II Circuit (Hollinwood) was formed in 1880, he became circuit steward, a position he held until his death. He also served as Sunday School superintendent and trust treasurer. He also served as a member of the District Committee for many years.

Henry spent fourteen years as Councillor and Alderman on Oldham Town Council. He was especially interested in education and also served as chairman of the libraries and art gallery committee. He was appointed a J.P. in 1903.

Local temperance organisations found Henry to be an ardent and eloquent advocate. He had a long and active association with the district branch of the Bible Society.