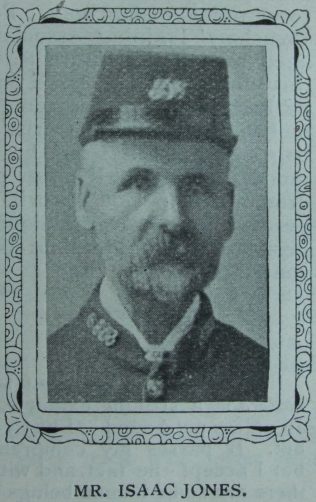 By his sterling character Mr. Isaac Jones has gained the esteem of the churches throughout the Shrewsbury Circuit. He was born on September 7th, 1845, in the Herefordshire hamlet of Easthampton. His parents were among the first fruits of Primitive Methodism in that locality, and had the pleasure of listening to the ministrations of Hugh Bourne. Mr. Jones was converted in early manhood, and in the year 1868 removed to Shrewsbury, where he became a local preacher, class leader and trustee. In the year 1896 he undertook the practical oversight of the Ditherington Society, where mainly through his influence and exemplary liberality the debt has been reduced, the church renovated, and a new organ installed. He has represented his Circuit at the Synod.

As a preacher he has the record of never neglected an appointment. He is a great reader of good books, and holds fellowship with the “Book of books.” His pulpit addresses are thoughtful and most helpful. The genial personality behind the preacher has contributed to the value of his public addresses.

In January, 1906, and after thirty-seven years’ faithful service, he retired from the duties of a postman. Having gained six good conduct stripes, the highest that could be attained, he was publicly presented with the King’s Imperial Service Medal, and was the first official in the Shrewsbury District to receive this high honour. In the Church and in his employment “faithful service” has been the motto of Mr. Jones’ life.

Isaac married Janet Bowers (b abt1867) in early 1909 at Shrewsbury, Shropshire.