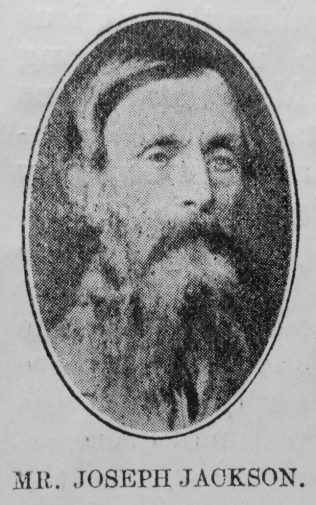 Transcription of Obituary published in the Primitive Methodist Magazine by William H. Lawson

By the decease of Mr. Joseph Jackson our cause at Suspension Bridge, Manea Circuit, has lost an old and true friend. Born in 1815 our brother was converted at the age of sixteen in a prayer meeting at Southery, and from that time forward pursued his heavenly race steadily for seventy-seven years. From Welney he removed to Waterbeach, from which place he married Ann Froment, who has proved a true helpmeet.

After some two years at Waterbeach Mr. Jackson removed to Hundred Foot Bank, where he resided for thirty years, at the end of which time he returned to Suspension Bridge (Welney).

He was a member with us for many years, and as long as health permitted was to be seen regularly in our services. His home was ever open to the preachers, both ministerial and lay. To hear him speak of the old veterans in our ministry was an inspiration—of Revs. Bellamy, Mackle, Key, Dolman, and many others. His early days were periods of poverty and bitter persecution, but he gave as liberally as possible to the Lord’s cause. The impressions made for good upon his large family can never be tabulated.

One daughter says, “A better father no family could ever be blessed with.”

For five months Mr. Jackson was confined to his bed. During that time many old friends visited him. The writer of this article spent many happy hours with him, as with streaming eyes he talked of the “Ferry Boat” which would soon be coming his way.

Friends came from far and near to pay a last tribute of respect to one whom all loved.

We shall miss him but we shall meet him by-and-by “When the day breaks and the shadows flee away.” Mr. Jackson leaves five sons and three daughters to mourn his loss, besides his aged widow who shared his joys and sorrows for seventy-two years. For all we crave the consolation that heaven alone can give.

Joseph was born in 1815 at St Ives, Huntingdonshire, to parents William, a labourer, and Alice. he was baptised on 7 November 1819 at Welney, Norfolk.