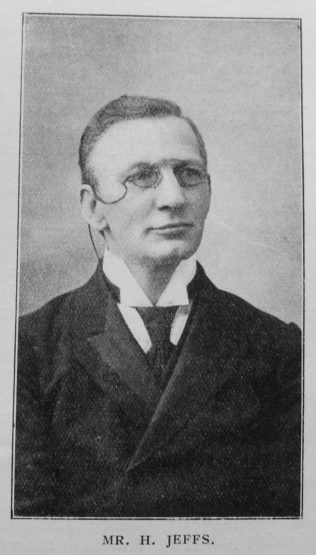 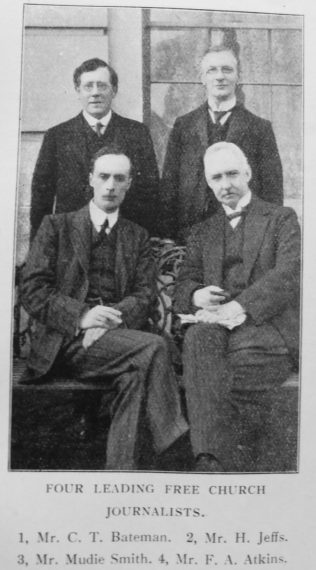 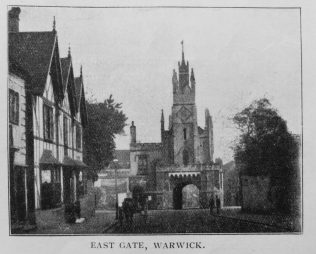 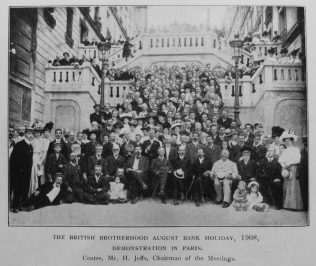 HARRY JEFFS is what he is by the grace of God and by virtue of his assiduity and self-mastery. He began life with no silver spoon in his mouth. An elementary school was his only university—excepting the world of books open to all of us. At fourteen he was at work—at “the case” as a printer’s apprentice. But after long days at his trade he had grit enough to scorn delights and spend laborious nights at self-culture.

Helped by a Congregational minister in his native town of Warwick (where he was born in 1860) he studied English history and literature, drinking deep and scorning “the little learning” which is “a dangerous thing.” Then languages spelt their attraction for him, and, lo! a rare capacity to acquire them proved to be his. Greek, Latin, French, German, Italian, Spanish, Hebrew—one after another he mastered them, and having mastered them he plunged into their literatures. I remember seeing him often in an Italian café in Fleet Street twenty years. ago, lost to the world, eating his chop almost unconscious of what he ate, with a dog-eared classic in some ‘furren tongue’’ propped up before him against the cruet.

In those days he was a bookworm, pure and simple. He trudged along Fleet Street with his mind in ancient Greece or in the Roman Empire, and it was by the barest of chances that he recognised you. I have heard it said that he has passed his wife without recognising her when in one of his brown studies. I am not suggesting that Mr. Harry Jeffs is an encyclopedia, There are limits to his knowledge. I have discovered them. Arithmetic is his weak point and mathematics are his béte noir. A schoolboy could floor him with a simple equation. But barring arithmetic, it takes you all your time to “corner” him. You dare not misquote a poem in Harry Jeffs’s presence. He would “nail” you in a trice.

Those chance meetings at a restaurant led to designed meetings elsewhere. Then came intimacy, then colleagueship in journalism, then comradeship in religious activity.

How the years have flown! For fourteen long years our desks have been side by side in Fleet Street, and Harry Jeffs has stood the test of time. As the years have slipped by, my regard and esteem for this comrade of the pen have deepened and expanded. After fourteen years I can say —and is it not something to say?—that I find no speck or flaw in the Christian quality of his character. Human, of course, he is and I could wish no other. I may fail to convey any definite impression of my beloved colleague; but if I do succeed in making my readers feel that this Christian Bohemian is a man swayed by the highest ideals and dominated by the love of Christ and man I shall not have failed.

The discovery that he could speak just as forcibly as he could write dawned upon Mr. Harry Jeffs like a revelation from above. To Primitive Methodism is the credit of this self-discovery. Mr. Jeffs is a thoroughgoing Evangelical, though he is a modernist in his attitude towards the Bible, and he found ten years ago a warmth and a fervour in Primitive Methodism that he failed to find in the Congregationalism of his upbringing. A wise superintendent captured him for circuit work, had him “on the plan” in no time, and at once awakened his latent qualities as a preacher and speaker.

As Editor of “The Christian World Pulpit’? Mr. Jeffs knew what preaching should be; and in the preaching of Primitive Methodist “locals” he discovered the need of more adequate training. The establishment of a local preachers’ training school was his first constructive work for the Connexion. A book on lay preaching was his first publication. It was born of his anxiety to improve the standard of local preaching, and the effort was not misspent.

Later came more ambitious books on “The Art of Ilustration” and “The Art of Exposition,” both of which found niches in the bookshelves of many ministers of all denominations.

The Brotherhood movement next drew upon Mr. Jeffs’s ample resources of energy, experience and knowledge. He provided it with its Hymnal, “The Fellowship Hymn Book,” and his formative influence was strongly felt in the organisation of this great movement. He is now its President, and he has done effective missionary work, at home and abroad, in its interests. In most of the Brotherhood crusades in France and Belgium he was a prominent figure, and his thorough knowledge of French proved of infinite value in these aggressive campaigns.

Last year he visited Canada and made a tour—almost a triumphal tour it was—from Nova Scotia to British Columbia, establishing Brotherhoods and quickening the spirit of those Brotherhoods already in existence. In this, his Presidential year, he has travelled north and south, east and west in England, carrying the stimulating influence of his enthusiasm wherever he has gone. Nor is his pen any the less busy in consequence of his “journeying oft.” The columns of “The Christian World” and “The Christian World Pulpit” bear evidences of his fecundity.

To Mr. Jeffs one kind of work is relaxation from other work. It is his only Way of recuperating. He has no hobbies, plays no games, and has never learned how to loaf. A sunny optimist who never worries, he goes through his busy days in a spirit of blissful imperturbability, surrounded by friends and without an enemy.

Mr. Jeffs’s versatility is almost as amazing as his assiduity. Journalist, author, orator, organiser—all these he is; but to the catalogue must be added another accomplishment, that of a writer of verse. He is almost as facile in verse as in prose, and one or two of his essays in poetry have reached a wide public. Perhaps the best known is his hymn “It is Coming,’ which embodies the ideals of the Brotherhood Movement and is included in the “Fellowship Hymn Book.”