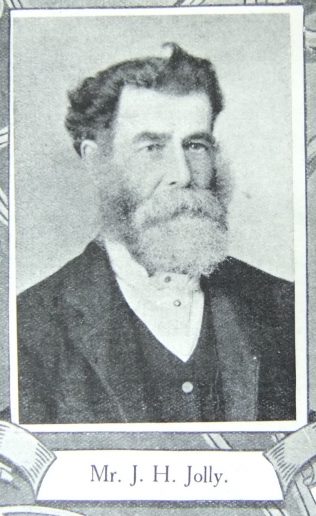 Mr. Jolly, the senior Circuit Steward of New Wandsworth and Fulham Station, was born at Bunwell, Norfolk, in 1839, converted through the agency of Primitive Methodism, and joined our Church in 1860. In 1862 he came to reside in London. His piety, zeal and loyalty so won the love and confidence of his Church that she continued to give him positions of trust and honour, e.g., Local Preacher in and since 1865; Sunday School teacher, Class leader, Society Steward, Trustee, membership of the District and General Committees, delegate to District Meeting repeatedly – once being Vice-Chairman, and delegate to Conference twice. He is a good man, very generous, punctual and regular in his attendance at the various meetings, and although his services are mainly confined to his own Circuit and Society, his sympathies are wide. For many years he has resided in Battersea, and is in politics a convinced and active Liberal.

John was born on 31 July 1838  at Bunwell, Norfolk, to parents Henry Jolly and Maria Baker. Henry was a tailor.

John died in late 1916 in the Wandsworth Registration District, London.