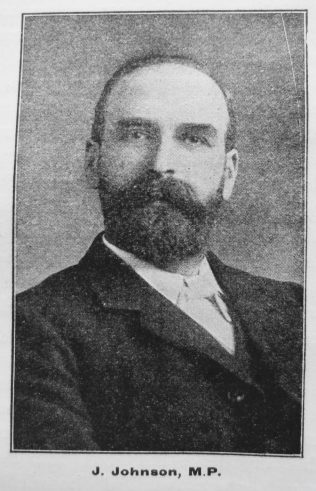 Transcription of Sketch in the Primitive Methodist Magazine by William Cuthbert

MR. JOHN JOHNSON, the new member for Gateshead, is 53 years of age. He was born in the Northumbrian village of Wapping, a few miles north of Newcastle. The outward circumstances of life and character may be described, but who can portray the inward spiritual forces of the man himself? That which is best in our life flows from hidden springs, which are fed from the cloud-capped heights. A critical estimate of life and character must consider the important factors of heredity and environment. If, however, evolution is the process of “becoming,” then the question is, not what a man may have been, but what he is, and what he may become.

Whatever may have been the natural endowments of Mr. Johnson, his greatness lies in personal achievement. Nature, however, has been generous in her endowment of capacity and varied gifts for the equipment of the work of his life.

He has a fine physique, and an active temperament. His well-formed head is becoming somewhat bald, revealing a high moral brain, with great reasoning and perceptive faculties. He inherits a strong constitution, is tall and vigorous, and time having touched him lightly he may be said to be in the prime of life.

Needless to say, in Mr. Johnson’s early days, education was at a very low ebb. Little or no provision was made for the education of the working classes. He received the ordinary elementary education of the time, but in later life his own strenuous efforts developed a large intellectual faculty. He used to rise at six o’clock each morning, so that he might have two hours study before he went to his day’s work.

Naturally thoughtful in early days, he read the writings of Butler, Macaulay, Carlyle, and others. His later reading has been more along the lines of modern social and political literature. The book which taught him great toleration for men, was J. S. Mill on “Liberty.”

Gifted with ideality and imagination, he is an enthusiastic student of Shakespeare, Milton, Dante, and other poets.

In his early preaching, he was most influenced by the sermons of Robertson and Stopford Brooke.

The tendency of his early preaching was argumentative, but in recent years he has combined the philosophic with the practical application of theology.

Mr. Johnson’s occupation as a youth, until he reached manhood, was that of a miner. The employment of a miner, from the nature of the work, is one of danger, and it demands considerable skill and endurance. Passing through the different phases of his calling, from hewer to deputy-overman, he has a practical, if not scientific knowledge of the strata, gas, ventilation, use of explosives, etc. This work makes men brave, and fearless of physical danger, but they are thoughtful, cautious, and skilled workmen.

We don’t know what might have been the result if £1,000  had been spent on Mr. Johnson’s early education, but we are certain that his experience has given him deep insight and great practical knowledge of the social needs of the mining community. Primitive Methodism, as a peaceful, progressive Christian democracy, has been the moral university, the great educative force of the northern miner. In this atmosphere of worship and work is developed the power of thought and speech, and self-sacrifice for the good of others. This religious community was the great dominating force in Mr. Johnson’s character and life. His political opponents, during the election, could find no fault in him, except his religion. Contemptuously they exclaimed, “He is a Methodist.” Mr. Johnson tolerantly has said that they were unconscious of the great significance of the truth they uttered. What was to them the language of derision, was to him the highest point of honour, for if he had not been a Methodist, he would never have stood before them as a candidate for Parliament. He gladly recognises the fact that he owes everything in his life, both in the social and religious world, to the influence of village Methodism.

Mr. Johnson has been a Primitive Methodist local preacher for 27 years. He is a preacher of a high order, and has, during his career, won great distinction and influence. Last year, he was chosen to speak at the great Missionary Meeting in the Spurgeon Tabernacle, when he gave a remarkable address to an audience of over 4,000 persons. In that address we have his view of Christian Socialism. He held that character and moral integrity are the true basis of social well-being; that society will be strong, prosperous, and happy, only in proportion to the virtuous conduct of its people; that it is to the highest interest of a nation to seek first the kingdom of God and His righteousness, in order that all things necessary for its individual and social good may be secured. All true permanent improvement in society must have a moral, not a material basis. The Gospel seeks the moral elevation of man as the best of social regeneration; Socialism seeks the improvement of his circumstances. The question arises, which of the two methods is likely to secure the highest good to society; the method of inwardness, purifying the hearts and affections of society, or the method of outwardness, which enquires what shall we eat and drink, and wherewithal shall we be clothed? The Gospel is a practical remedy, and Mr. Johnson confidently asserted that the application of this principle to the social qualities of the age, would bring that social millennium that all ages have sought to consummate.

Mr. Johnson himself is a striking example of this Christian philosophy. The difference between men lies not in their capacity or circumstances, but in the force of their conviction, the strength of their faith influencing their will and leading them to the highest action. This resolute faith and determination in the use of opportunity has been the secret of his progress in life. He is the soul of honour, and any deviation from that sense of honour, no matter what the gain from a worldly point of view, would be “whips and scorpions” to his inner life. A gentleman once wrote to him, saying: “Mr. Johnson, you have taught me true politics, for you have shown me that citizenship is a sacred duty, and not the clamour of a political party!”

Mr. Johnson is not an opportunist, but he will not fail to understand the progressive spirit of the age, and be ready to “launch out into the deep” on that “tide in the affairs of men, which taken at the flood leads on to fortune.” He has large individuality, and, of course, is conscious of his own power. His great charm, however, is a simple naturalness and modesty.

The outward circumstances of his career, culminating in that memorable event on Wednesday, January 20th, when Gateshead elected him champion of the progressive cause, can only be brie?y mentioned.

In 1878 Mr. Johnson removed to Andrews House Colliery, Marley Hill, in the county of Durham. Here he began to take an active part in the work of the Durham Miners’ Association, laying the foundation of his later career as a Trades Union leader. In 1883 his ability and enthusiasm in the cause was signally recognised by his being elected a member of the Executive Committee. He loyally served the Association in that capacity for a considerable period. In 1890 he was elected general treasurer of the Association, and in 1897 he was appointed to the honourable office of finance secretary of that important organisation, the Durham Miners’ Union. This position he holds at the present time. That Mr. Johnson has gained the unqualified confidence and implicit trust of his Union is evident by the important duties which have from time to time been assigned to him. Since 1890 he has attended all the International Congresses of Miners that have been held: two in Paris, three in Germany, one in Vienna, and three in Belgium. He also attended the International Socialist Congress at Zurich, Switzerland, in 1893. Mr. Johnson has served on the Durham Board of Guardians, and has been a member of the Durham County Council for the last seven years. He is also a governor of the Durham County Hospital. He was returned for Gateshead by a majority of 1,205 votes over the Conservative candidate, Lord Morpeth. We are glad of the result of the election, because he will make a splendid addition to the Labour Members of the House of Commons. He will also be an addition to the band of Nonconformists now in Parliament. Mr. Johnson stands for Home Rule, the amendment of the Education Act, and Temperance Reform. He has also fearlessly declared for Free Trade, as being the most righteous and most politic method for the country as a whole. We sincerely congratulate him on his great victory, and trust that for many years he may represent Gateshead in the House of Commons.

John was born in 1850 to parents Thomas, a coal miner, and Martha. His brother, Matthew, was a PM Minister.