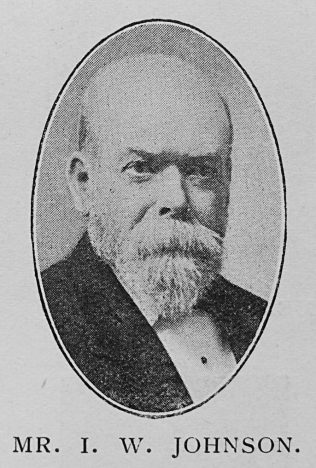 Transcription of obituary published in the Primitive Methodist Magazine by H. Yooll

Mr. Isaac W. Johnson was born of godly parents in 1837, on the banks of the Ouseburn, Newcastle-on-Tyne, and died November 10th, 1910. He was early bereaved of his father, and at the age of eleven started work at a local pottery. He became a scholar in our famous Sabbath School at Ballast Hills, and was influenced for good by such worthies as the late W.B. Leighton, P. Wears, D. Boyd, and others.

While in his teens he removed through slackness of work to Sunderland, where he at once joined our Church. At the age of twenty he prepared for the local preachers’ plan, and shortly returned to his native town. In the old Newcastle-on-Tyne Circuit, and on the Tyneside, he became a well-known and zealous worker in his Master’s cause. As Sabbath School superintendent at Ballast Hills, and subsequently at Heaton Road when it was formed as a society from Ballast Hills, he earned a good report. As local preacher for fifty-one years, and a class leader for many years, besides serving as trustee for several of our chapels, he was a pillar in our Zion.

He did considerable pioneering work in Circuit extension and was held in highest esteem by successive ministers as a trustworthy and efficient worker in the Church of his early choice. He had a kindly, sympathetic nature, was a lover of peace and commended the religion of Christ by ardent service and willing self-sacrifice. In this he was faithfully seconded by his excellent wife, who pre-deceased him several years ago. The family remain to cherish sacred parental memories.

Our late veteran was one of the very few remaining links of a worthy host of leaders and makers of Tyneside Primitive Methodism, and has left, with them, a bright broad track of fertile Christian influence behind him. An earnest student of the Word of God, a man of prayer and power, a lover of his denomination, a faithful friend, he has passed away full of years and honour. No greater boon could come to our churches than an increase of men of his type.

Isaac was born in 1837 at Newcastle upon Tyne, Northumberland, to parents John, a potter, and Mary.

Isaac died on 10 November 1910 at Newcastle upon Tyne, Northumberland.