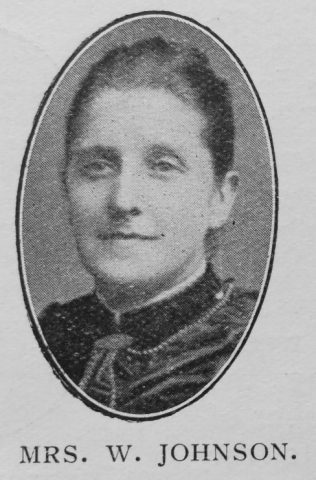 The death of Ruth Johnson, of Great Horton, Bradford, removes a worker of whom any Church might be proud. Born at Bollington, Cheshire, in 1847, our sister, in early life, attended the Wesleyan Church, but while still a girl, the family removed to Bradford, and here she soon became a Primitive. Settling at Gate Street Mission, from which our Rehoboth Church has come, Ruth Arnold speedily became one of its foremost workers. Joining our Church at Great Horton on her marriage to Mr. William Johnson forty years ago, she immediately threw herself into Christian service here, and continued in the front rank of our workers until the last.

While she always rendered splendid service whenever she was called to serve, as a secretary she excelled. She won the admiration of all the Church by the way in which her duties were carried out. For a number of years, at great sacrifice, she conducted a meeting for the poor women of the district, and many are the testimonies borne to the good she accomplished in this way, and to the loving regard in which she was held by those whom she sought to benefit.

She was also a most loyal and devoted Primitive Methodist, and few have a better knowledge of our Connexion than she had. Her home was always open to our preachers, and many found there “a home away from home.” Though an illness overtook her several years ago which incapacitated her for service, yet the end came rather suddenly on February 6th. The interment took place on the following Thursday, the service being conducted by Revs. J.J. Reeves, J. Morrison, and W. Sawyer, and the sympathy of the friends with the bereaved family was expressed by Mr. Joseph Wilson. Though she has gone, the fragrance of her life and character will abide long.

Ruth was born in the summer of 1847 at Bollington, Cheshire, to parents Matthew, a cotton spinner (1851), and Ruth.

The 1861 census return records Ruth working as a cotton reeler.

She married William Johnson (abt1834-1913), an elementary schoolmaster (1881) in the summer of 1870 at Bradford, Yorkshire. Census returns identify four children.