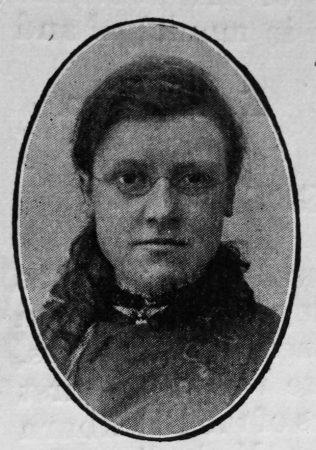 Transcription of obituary published in the Primitive Methodist Magazine by John B. Buglass

Minnie, the wife of Mr. J.M. Jolley, daughter of Rev. W. Harris, and grand-daughter of the late Rev. S. Smith, was born in Douglas, October 28th, 1870. When only a child she gave herself to the Saviour, and from a scholar in the Sabbath School she advanced to the office of a teacher at Bolton, Bacup, and Peel.

On her marriage with Mr. Jolley she joined our church in Wellington Street, Douglas, and became a prominent and useful worker. Gentle, kindly, and highly gifted, she was a most lovely personality, excelling as a pianist, soloist, reciter, teacher, and public speaker. The success of the Intermediate C.E. Class was mostly due to her indefatigable labours. At the time of her death she was Secretary of the Temperance Committee of the Isle of Man Union, and an efficient member of Mr. Looney’s Prize Choir.

Her death came suddenly and unexpectedly. A few days before her departure she gave birth to a daughter. For some time all seemed to go well, but suddenly there was a change and she passed to the heavens on October 14th, 1907. The funeral service in the home was conducted by Rev. W. Newns, and a beautiful and impressive address was given at the Church by Rev. T.M. Pinnock. The interment at the Borough Cemetery was witnessed by a crowd of mourners. A memorial service was held in Bucks Road Church on the following Sunday, when Rev. T.M. Pinnock preached an impressive sermon to a large and sympathetic congregation. May her sorrowing husband, her aged father, and eight motherless children be divinely supported in their great trial.

Minnie was born 28 October 1870 at Douglas, Isle of Man, to parents William Harris, a PM minister, and Ann Smith. She was baptised on 8 December 1869 at Braddan, Isle of Man.