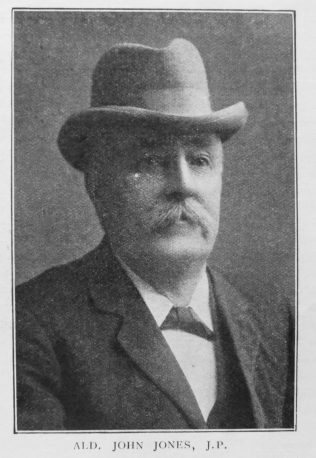 TO the long list of great and prominent laymen who, since last Conference have been called from the  courts of our sanctuaries, must now be added the name that heads this page. Everywhere in Primitive Methodism the going of “John Jones of Chester”  will be mourned. The best way in which to measure such a loss is to apply to the circumstance the measure of the man. Such was the native ability of Alderman Jones, such his character, such the importance and excellence of the services he was accustomed to render to our interests both in his own city and over a wider area, such his personal qualities of head and heart, that his withdrawal must, in more places than one, create a new situation which will try hard the metal of many who have found in him always a tower of strength and a source of inspiration.

It is easy to enumerate the offices a man may have held in his church, but not always as easy to give a true impression of the manner in which he has fulfilled his responsibilities and wrought the work of his life. Happily in this case we are to a large extent spared the attempt. Much of the Alderman’s religious work was done under many eyes, and those who watched the doing of it are forward to-day to speak concerning the way in which, for a long and busy half century, he toiled for the Church of his youth—the Church which became increasingly dear to him as life ripened towards its close.

It is surely a great thing to be able to say of our brother that had he been spared until September next he would have been a Local Preacher for fifty years and that for no part of that long time has he been “retired.” The very Sunday after his sudden departure he should have preached in one of the city churches, in whose pulpit he would have been welcomed, for in all the district there was not a Free Church congregation which was not glad to give him audience. A student of the Bible above many, he added, to splendid natural  qualifications for public address, great stores of knowledge diligently acquired and continually replenished. He preached an evangelical Gospel with all his heart and never outgrew those views of truth which had been the means of his own salvation while still a lad. For nearly forty years, again, he had been Steward of his Circuit, for a year Teacher of the Adult Bible Class at George Street Church, the temple where his heart and treasure were. Then he was a Class Leader, too—had been for thirty-six years, and this office to him was a sacred charge never to be neglected whatever came or went. It is a great thing—perhaps the greatest—to be faithful, and diligent, and liberal at home, and the Primitives of Chester, especially those of “George Street,” bear testimony that, in all these things, he set an example never to be forgotten, an example which had much to do with the raising of our cause to power and distinction in the city.

His work in Chester and neighbourhood, abundant as it was, formed, however, but a part of the services rendered by Alderman Jones to his denomination. The minute books of the committees of the Liverpool District would reveal a history of labour which might well inspire the reader. Of how many annual Synods he was a member we cannot say, neither can we say to how many Conferences he was sent as delegate. In both courts he was a familiar figure, and few men knew better than he how to embrace the opportunities afforded by such assemblies of helping forward the work of God.

Of course, he became Vice-President of Conference, which recognition was conferred at Nottingham so long ago as 1893, and it is safe to say that no occupant of the chair ever filled it with more efficiency and credit than did he. Broad in his conceptions of Christian brotherhood, other Churches were helped as occasion arose. He passed the chair of the Chester Free Church Council. We can remember, as we write, a great speech he made in London but a few years ago at the Conference of Methodist Churches, held at City Road Chapel.

In addition to all this, Alderman Jones was a man who took wide views as to his duty as a man among men. Early in his life he was led into the realisation that religion imposes duties to society as well as to Church and altar. Long ago his fellow citizens called him to the Council chamber of his historic city. Time came when he filled the office of Sheriff; time again when he was elected to the Mayoralty, becoming one of a line of chief magistrates reaching down out of the mists of far antiquity. In all these positions he remembered first his God and the public good. In a fine tribute appearing in one of the city papers it is pointed out that, in the administration of the affairs of the city, he was always the man who preached and prayed in George Street Church. He wore throughout a career of much toil and not a few temptations, for public life has many perils, the white flower of a blameless life. He was appointed to the Bench. He was the leader of the Liberal party in the city. He was one of its foremost business men having from humble beginnings carved his way to the headship of a firm standing high in the commerce of the neighbourhood. In all this he remained the same faithful, unaffected, manly and kindly man—in all this he was a Primitive Methodist first!

But concerning this there need be little wonder. He was born in the Church, and rare good Primitives were his father and mother. Primitive Methodism had provided the highest inspirations of his life, its

chief joys, all that was best in his youth, his prime, his later years. His kith and kin were in the Church. His brother Robert, called home in the very act of preaching the gospel at West Bromwich, nearly ten years ago, was one of the most devoted ministers the denomination has ever possessed. John Jones loved our Zion, and for her he lived!

A sad day in Chester was that on which he was carried to his grave. Everywhere throughout the city tokens of mourning were to be seen. George Street Church was more than crowded for the funeral service. The Mayor and Corporation, with deputations from almost every public body, joined with old companions in holy labour to do him honour. James Travis, perhaps his closest friend, who knew him as none outside his family circle knew him, in an eloquent address broken by emotion, spoke of the man, his work, and character. Well they might! Now that he has gone we can only recall the charm and wonder of his life and pray that, to our Church, God will send, right speedily, others who will take up the work he has laid down and carry it forward to the consummation for which he ever prayed!

John was born in 1846 at Christleton, Chester, Cheshire, to parents William, a railway labourer, and Emma.

He married Ellen Moore (1847-1901) in the spring of 1868 at Chester, Cheshire. Census returns identify five children.