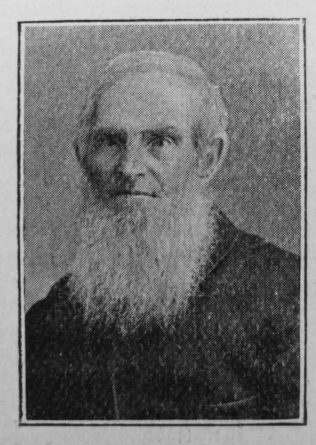 Transcription of Obituary in the Primitive Methodist Magazine by J.M.B.

Joseph Jeffries was born at Alton on May 13th, 1824, his parents being amongst the first members of our Society at Alton. His father was one of the first local preachers whose names appear on the Ramsor Circuit Plan, and he, being an acceptable speaker and earnest worker, rendered valuable service to the Church and Circuit. Brother Joseph Jefferies was thus cradled and trained in the Primitive Methodist Church.

The early home training and teaching had a lasting influence on the life of our brother. Though like many others to-day, he let slip the golden days of youth, yet he never severed himself from the circle of Church life.

He was united in marriage to a daughter of Mr.Ford, who also was associated with the cause at Alton. Some time after their marriage, Joseph and his wife removed to Birmingham, and there being removed from the influence of home, he for a time entered upon evil ways. For some time he was amongst the leading pugilists of Birmingham, but through this anxious time his wife ceased not to pray for his his conversion, and missed no opportunity of tenderly reproving him for his wrong-doing. At last Joseph himself could see that this course of conduct tended to death and was already having a painful effect on the health of his devoted wife. Eventually the persuasions of his wife prevailed, he left his evil companions of Birmingham, and went to reside at Oakmore. Here he attended the Primitive Methodist Chapel, and on November 7th, 1864, he yielded himself to Jesus, and then and there entered upon that splendid service for God and Primitive Methodism, which extended over a period of forty years.

Brother Jefferies could tell of many hardships endured in these early years. But these were willingly endured by our friend, for he early learnt the value of private prayer, and he was constant in his supplications at the throne of grace.

Immediately after his conversion, Brother Jefferies began to work in the church and Sunday School, and the leaders were not long in discovering the valuable gifts with which his nature had been enriched, and they encouraged him in his desires and efforts to be useful.

From an old Plan we find that his name appears “On Trial” in the beginning of the year 1866, the Circuit at that time being known as the “Ramsor and Cheadle Circuit,” the number of its chapels and mission rooms being forty-one. The wide extent of such a circuit meant a large amount of interest and self-sacrifice in attending appointments. To be in time, meant to be out early, and to return late at night, and often to hold three services instead of two. To the honour of our brother be it said, that he was not known to ride to his appointments on Sunday till within the last year or two, when he was physically unable to walk: he must have thus walked thousands of miles to and from his appointments.

Being a fluent and earnest speaker he was well received wherever he went, and his love for preaching the Word of Life was zealously shown by the important fact that he was never known to miss an appointment.

In the course of time he left Oakmore and settled at Alton, where he was appointed Superintendent of the Sunday School, which position he held for a number of years; he was also a trustee for Oakmore and Alton Chapels.

He took great delight in visiting the sick and dying, and in the exercise of this ministry he has been instrumental in leading penitent sinners to the Saviour of men.

About twelve years ago he underwent a serious operation, and since then his health was never the same. At times his sufferings were most painful, yet through them all he was never heard to murmur or complain. He often told his daughter Mirrie, in whose home he spent his last years, that when his pain was most severe the Lord Jesus was most precious to him, and gave him ease.

Four years before his death, the business of his son-in-law necessitated a removal to Prescot, and as there was no Primitive Methodist Chapel there he attended the Independent Methodist Chapel, whose members much appreciated his worth. He was ready as of old, to assist in any kind of religious work, when his strength would allow; often leading the class meeting and preaching to delighted congregations.

His last days were spent in the Birmingham Third Circuit, he having removed with his son-in-law to Selly Oak, and the same devotedness to the services of our church characterised his brief stay there.

It was a great joy to see him in the last few hours of his life, with all his family gathered round his bed, like the Patriarch of old blessing his children. He desired his daughter to sing, and she asking what he would like, he replied anything about Jesus, and then he himself began as best he could to sing “Jesus Lover of my soul.”

During his last days be frequently spoke of the happy re-union with loved ones which he was soon to enjoy in the Land of Best.

A few minutes before he died, he said to his daughter, “I am going to Heaven to be with Jesus,” then was repeated to him the words of the Psalmist, “Yea, though I walk through the valley of the shadow of death,” etc., and hearing these words he smiled and waved his hand in token of victory. And so this faithful servant of the Lord fell asleep in Jesus on June 25th, and was interred at Alton by the Rev. A. Stabler on June 30th, 1904.

Reference to the Ramsor Circuit Preaching Plan identifies his father as J. Jeffries.