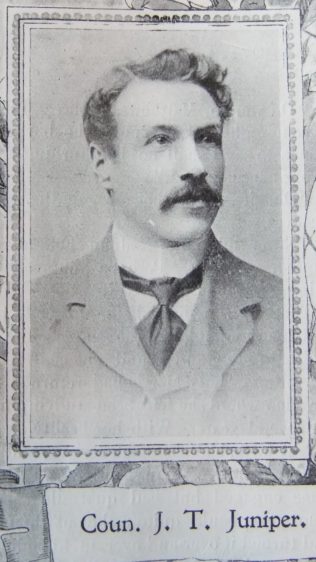 Councillor Juniper was born at Howe Street, a village on the Chelmsford Station. At the age of fourteen he left home for London, carrying with him the prayers and gracious example of pious parents. He attended the services of our church at Dartmouth Park and there gave himself to Jesus Christ, beginning a life of Christian service in which he has had joy until this day. Change of occupation led our brother to Hackney and to his association with Clapton Park Tabernacle, where he continues to serve his church. Though still a young man, he has been Station steward fourteen years. As a local preacher his services are highly appreciated. For ten years he has held the office of District Missionary treasurer, and has several times been delegate to District meeting. His fellow citizens have recognised his uprightness of character and soundness of judgement, by electing him a member of the Hackney Town Council on three occasions.

James was born in 1867 at Howe Street nr Great Waltham, Essex to parents James and Eliza. James worked the land.

Joseph died in the spring of 1938 at Leyton, Essex.