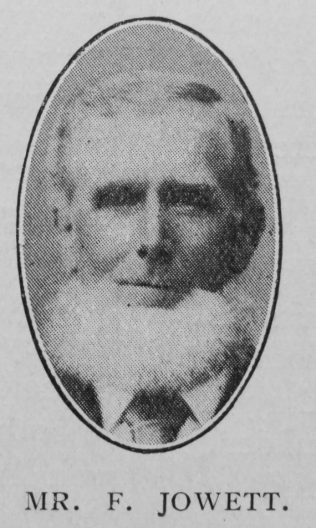 Transcription of obituary published in the Primitive Methodist Magazine by M.H.C.

Mr. Francis Jowett was born at Rawdon, a village near Leeds, 1833. Converted in his twenty-seventh year, he was soon after appointed class leader. This office he held for ten years, and in 1859 removed to Leeds and joined the society at Prince’s Field. Here he was invited to conduct a class, which grew to be the largest and most flourishing in the society. Mr. Jowett also worked in the Sunday School as the teacher of the young women’s class. For the last twelve years Mr. Jowett has been associated with Cardigan Road Church, where he endeared himself to everybody by his gentleness and grace. In him the “fruit of the Spirit, which is love, joy, peace, gentleness, meekness,  self-control,” was readily seen.

His children are all associated with the Church and reverence his memory. The closing weeks of his life were burdened by much pain, but when the pain had passed he loved to speak of the Saviour, and of that heaven into which his spirit has found an abundant entrance.

Francis was born in 1833 at Rawdon, Yorkshire, to parents William Wellfit Jowett, a clothier, and Elizabeth Lawn. He was baptised on 17 February 1833 at St. Peter, Rawdon.