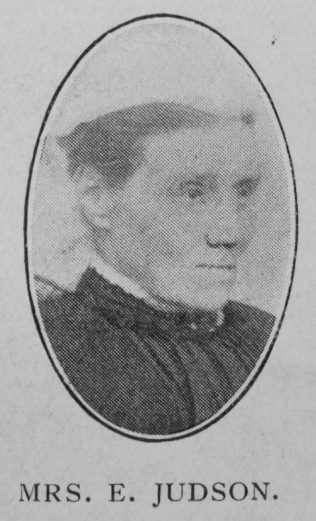 Transcription of obituary published in the Primitive Methodist Magazine by A.P.

It is almost impossible to speak of Mrs. Judson without reference to her saintly husband, from the shock of whose tragic death she never recovered. Born at Castle Bytham, Sept. 28th, 1842, she joined the Church at Camden Town Mission 1862, and, until laid aside by sickness, she faithfully and loyally served her Church at Lincoln, Sheffield, Ilkeston, Newark and Worksop.

It was the writer’s privilege to visit her during her last illness. What faith she had that He who had begun the good work in her would complete it. Her children were taught by precept and example to love God’s house and to prize its fellowship. She entered into rest at Worksop, but was interred at

Newark, May 22nd, 1912, Revs. A. Parkin and J. Turner conducting the service. Her family mourn her loss, but not as those without hope.

She married Thomas Judson (1841-1901), a groom (1861), in the spring of 1861 in the Bourne Registration District, Lincolnshire. Census returns identify eight children of twelve children.

Eliza died in May 1912 at Worksop, Nottinghamshire.