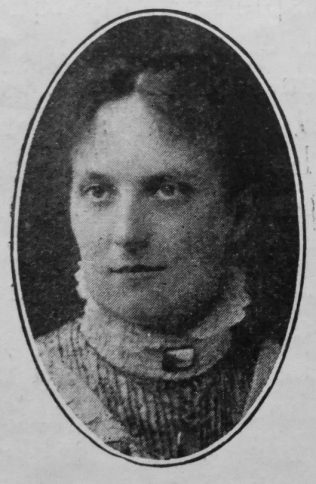 Transcription of obituary published in the Primitive Methodist Magazine by H.B.K.

Frances Annie, elder daughter of Thomas Durnford, builder and contractor, was born in London, September 4th, 1867. Undoubtedly, some of her special qualities of body and mind came to her by inheritance. She had the  prepossessing form and features, the musical voice, and the natural refinement of her parents. Mrs. Durnford was a deeply religious woman, remarkably gifted in prayer, and very apt in her quotations of Scripture. Frances, on the testimony of her mother, was from the first a child of spiritual instincts and high ideals. Her conversion was early, and was a home-conversion. A decisive moment of trust and surrender there must have been; but, from the very nature of the case, that conversion was not violent. It was rather the attaining of a fuller and deeper consciousness of what was ever at the springs of her life.

Before passing from the consideration of Mrs. Judson’s home and parentage, we recall how close and tender to the last were the ties that bound her to parents and sister. Her mother, indeed, predeceased her, but with her excellent father she kept in close touch by frequent and intimate correspondence. Until the time of her marriage in 1886 to Rev. W.D. Judson, Frances Annie was connected with the Highgate Road Baptist Church. She owed much to the Sunday School connected with that church, and especially was she indebted to her teacher, Mrs. Smith, a cultured Christian lady. But she had also relations to Primitive Methodism in this early time that were to be fruitful of consequences. Soon after our new church in Dartmouth Park Road was opened, she volunteered her services as a teacher. The Rev. Joseph Dinnick, who was on the station at the time, recalls Frances as she engaged in her work—her exemplary conduct, her lady-like demeanour, her intelligence and aptitude to teach, her brightness and attractiveness. It is to this time of dawn and promise we must also look for the beginnings of her interest in Temperance.

At thirteen years of age she signed the pledge at a weekly Temperance meeting, and Temperance, already adopted as a rule of life, became a “Cause” to be assisted and promoted. The time was to come when that Cause would make its strong appeal and call forth all her powers. As she publicly declared at Glasgow in 1899: “Enthusiasm for a great cause makes life worth living. I have found that out.”

As a Primitive Methodist minister’s wife for twenty years Mrs. Judson acquired an intimate knowledge of the life of the people in districts very varied in character. This will be seen if the successive circuits in which her husband travelled after his marriage are named. These have been Sheffield, Retford, Horwich, Bramley (Leeds), Westgate, Woodley, and Leigh. Some of the experiences of these years, in which she was proving herself a true helpmate of her husband, were burned into her memory and gave force to her womanly appeals. Thus, at Glasgow, she told how once a decent working man had brought money requesting her to buy meat with it for his three hungry children. His wife, once a trim, smart young woman, had become quite besotted. The meat was taken to the home, and the mother threw it to the dogs. “When I saw that,” said Mrs. Judson, “I vowed I would work so long as God gave me strength, against the curse of drink.”

Intemperance was not the only evil that roused all the womanhood that was in her. On the platform of the Manchester branch of the National Vigilance Association, in the course of an intensely practical address, she declared that “the three great evils of the country, drink, immorality, and the greed of gold, were intertwined like three horrid serpents.”

It was in Retford Mrs. Judson began that public career which in a few years was to make her one of the best-known women speakers of our time. For three years her labours had been confined to inconspicuous spheres of usefulness—such as the Sunday School; but at Retford she became president of a small branch of the British Women’s Temperance Association, and took part in two large Temperance Missions in the Corn Exchange by which the temperance sentiment of the district was greatly encouraged and strengthened. It was, however, while residing at Horwich, to which Mr. Judson removed in 1892, that all at once she sprang into fame as a speaker. In response to an urgent “wire” from an anxious official, Mrs. Judson stepped into the place of Lady Henry Somerset, who was temporarily incapacitated by a severe headache. At this afternoon Conference at Bolton Mrs. Judson addressed several hundreds of women from various parts. Her reputation was made, and requests for her services poured in from all quarters. She had the confidence of local workers and was a trusted leader amongst them, but the path of duty broadened and led her much farther afield. Her reputation became national. She was appointed a member of the executive of the B.W.T.A., and one of its “national speakers.” She spoke at the great annual public meetings of the Scottish Permissive Bill and Temperance Association in Glasgow and the Ladies’ Auxiliary “At homes,” in 1898, 1899, and 1903. She attended series of meetings in other parts of Scotland as well as in Belfast; and she declined pressing invitations to visit the U.S.A., Australia, and New Zealand, as well as urgent entreaties to take the superintendence of two important sections of temperance work.

These facts speak for themselves. The audience that gathers annually in the Glasgow City Hall is an exacting one. Only the best qualified speakers are privileged to address such an audience, and yet Mrs. Judson had the honour—unique for one of her sex—of doing so thrice, and of being invited again and yet again to renew her visits. She simply captivated her audience. Wherein lay the secret of her power? Even the uneducated felt and bowed before her power, though they might not be able to analyse it. The best, as abundant evidence shows, appreciated her the most. Yet even they, when they attempted to analyse what it was that had taken them captive, had in the end to fall back on the verdict of the Scottish divine who had listened to her: “She is winsome womanhood at its best.” In that sentence he pierced the centre of the matter. All through her speaking it was a true woman appealing to women, and especially to “the inherent motherhood ” of woman.

We have no wish to exaggerate and, indeed, cannot well do so. We have said, the best qualified to judge have been the most unqualified in their praise of Mrs. Judson as a platform speaker. Our President (Rev. H. Yooll) in his impressive address at the obsequies of Mrs. Judson numbered her amongst “the queens of speech.” “The Christian World” affirmed she was one of the. best women speakers of the day, and Mr. T.W. Russell went beyond even that. In private she made the same impression on those privileged to know her intimately—the impression of “a perfect woman, nobly planned.”

The Countess of Carlisle on Mrs. Judson’s demise wrote a touching letter—a letter too long and, perhaps, too sacredly intimate in its character, to be given here in full. Yet a few words of this letter we may venture to quote: “I loved and reverenced your wife; she was all loveable—so winning, so helpful, so radiant of soul. Our loss through her death is very grievous to us her fellow-workers, and we sorrow greatly for the loss of her ministering life.”

As we read and ponder such spontaneous tributes to Mrs. Judson’s gifts and character as these, we feel the force of the Rev. George Bennett’s remark made in the course of the beautiful address he gave at the unveiling of the Memorial Tablet to Mrs. Judson on December 21st last : “With her, as a Church we had a rich personality, richer than we knew ; we know now we have lost her.” We thought we knew her as we read or listened to her addresses at the great missionary meetings at the City Temple and Spurgeon’s Tabernacle, at the Conferences, or in such populous centres as Hull. But we did not take in the full proportions of her work or the national reputation she had acquired. But we know now. The friends of the departed—husband, father and sister—have reason to be humbly grateful to God that one so gifted alike by nature and grace was granted to then for a season; and we as a Church should cherish the memory of one of the most distinguished in the long succession of women who have served the Connexion and adorned it by their character.

Measured by mere years Mrs. Judson’s career was comparatively short. She fell asleep, August 22nd, 1907, in the forty-first year of her age, and her remains are interred in the same grave as those of the Rev. John Judson and his wife, in the Chadderton Cemetery, Oldham. May God comfort the bereft ones, and grant that other consecrated women may take up the tasks at which she so earnestly laboured.

Frances was born in the summer of 1866 at Marylebone, London, to parents Thomas, a builder, and Frances Ann.