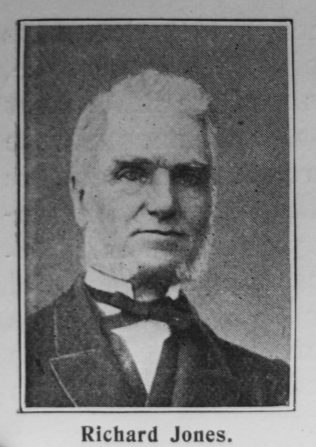 Transcription of Obituary In the Primitive Methodist Magazine by W. Jones Davies

I undertake the task of writing this memoir with peculiar interest, because the subject of it has been one of the moulding forces of my life. As a visitor in my father’s home, as a preacher in the village meeting-house, and as a host in after years, he has left an impression upon me that can no more shake off than I desire to do so. He was one of the most powerful personalities it has been my privilege to meet, and if he had not been so retiring in disposition, so careless of fame and so shut off from the outside world, his name would have been upon the lips of the many. His judgment, integrity, firmness, courage and religious fervour were of the highest order, and if these had been combined with more ambition, but few places, especially in the Church, would have been closed to him. He was born in Clun in 1825. His mother was in many respects a remarkable woman, shrewd, strong minded, godly. He was converted at the age of nineteen, and at once joined the little church in Clun, of which he remained a member until the day of his death. His conversion was a very real thing, for religion became to him the pole-star of his thinking and action. In the home, as in business, it had the first place. He did not preach that the spiritual life was all important and then act as if it were not, but he put “first things first.” His presence made for spirituality at home and in the house of God. His alert listening, deep sympathy, and reverent responses were an inspiration to preacher and people in the public services, and his fervour, self-absorption and deep communion with God gave tone and intensity to the private means of grace. His money as well as his time, was at the disposal of his religion. Long before systematic giving was recommended by Conference, he practised it. Hence his gifts often seemed liberal beyond his means, and were always an incentive to others. He gave on principle, and as “unto the Lord,” consequently this act was a joy to him as well as a duty. But his interest soon went beyond his own religious life. He became a church official soon after his conversion, and did more than can be tabulated for the Clun Society and or the Circuit to which it belonged. The Bishop’s Castle Circuit owes its status and stability to a few men of character, of whom he was the chief. His influence in the quarterly meetings was unique. Not only was his advice invariably taken, but his rare tact and good sense often saved the dignity and good character of the meetings. For many years he was a kind of bishop of this Circuit diocese. The Clun Society and Circuit literally owe their existence to him, for when he became a member the Clun Society was feeble in the extreme; but now, not only is there a handsome block of buildings, church, school, and minister’s house, but it is the centre of the most forceful influences in the life of the town and the soul of the several villages around that help to form the Circuit.

His preaching can only be described as powerful. People came in larger numbers than usual to listen to him. They knew for one thing that he would be there and that when they did come there would be more than husks to feed upon. Owing to business and other cares, he was not an omnivorous reader, he was not a book-worm. Truth came to him through his intuitions rather than through books. He possessed keen intuitions, a prophetic soul, and the things others argued and read to, he saw and, seeing, proclaimed. He was a man taught of God. He was a humble-minded man, retiring in disposition, and often went to his work in fear and trembling, but as often returned bringing his sheaves with him.

In his home life may be found the secret of his official influence and public power. Not only was family prayer a sacred institution, but often would he during the day steal away to his secret altar and come back with tear-dimmed eyes and radiant face, which told of close fellowship with God. Not only was his house for many years open to ministers and other servants of God, but about the welcome given there was such an urbanity, such whole-hearted kindness, such grace, that visitors felt it to be a privilege and inspiration to be there. Truly a “church in the house” was this house. He was a strict disciplinarian, at the same time sweetly tender and beautifully kind, consequently his family reverenced and loved him. His eldest daughter says: “We sometimes thought him strict, but we were never punished at haphazard. Every extenuating circumstance was patiently heard, and I cannot remember being punished before kneeling with father in prayer. He frequently admonished us with tears, showing that the ordeal hurt him more even than it hurt us.”

He was a convinced and consistent Free Churchman, and was the chief exponent and leader of Nonconformist principles in his town. His views often brought him into collision with the leading people of the place, and sometimes appeared to jeopardise his business success, but his uniform courtesy, sincerity and consistency led those who differed from him to respect and trust him, so that in the end, instead of losing, he gained much. The fact is he carried his religion into social, civic and educational matters, and he never attended a meeting without first praying about the questions to be discussed, and would frequently say afterwards, “I was as conscious of being led by the Spirit of God as I have been in delivering a sermon.” No wonder that when he died he was mourned by people of all ranks and opinions, for they felt that one of the Lord’s keepers of the city had been taken.

His family has received many testimonies from all classes to his worth. Only one or two can be reproduced here. The Rev. J.J. Lawrence, Pastor of State Street Church, Albany, U.S.A., says; “My uncle was a fine illustration of the Scripture words ‘Upon the top of the pillars there was lily-work.’ for there was in him a wonderful blending of strength and beauty.” Rev. E. Sheppard, of Leigh, says: “there has not been a man since I entered the ministry who has impressed me more than Mr. Jones. His was a splendid life.” Rev. J.E. Hughes, of Southport, says: “For six years I was in the closest contact with him, and I have no hesitation in saying that he was one of the finest men I ever met. He held a unique position in his town and neighbourhood, and his influence was great because he was good.” The testimony of his own children cannot be put into a few lines, but to them he was the very incarnation of all that is truest, noblest, strongest and tenderest; indeed, one almost more than human.

He entered into rest January 20th, 1900. Loving hands bore him to the chapel, which was draped in white according to his own wish, and from thence to the grave, where his dust sleeps in sure and certain hope of a joyful resurrection, for “he was a good man, full of faith and of the Holy Ghost.”

Richard was born to parents Edward and Margaret Jones. Edward was a tailor, a profession which Richard also followed.

Richard was married to Ann (b abt 1826). Census returns identify two children.