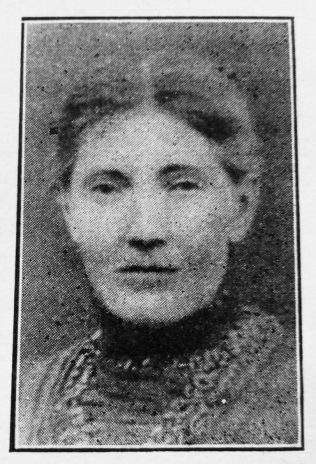 Transcription of Obituary in the Primitive Methodist Magazine by William Clulow

By the sudden death of Mrs. Sarah Cooper Jones, of Woolstone, in the Church Stretton Circuit, our Church has lost a devoted worker.

Mrs. Jones was born at Orleton, Herefordshire, on April 3rd, 1845. She began to collect for the Missionary cause when only three years of age, and a missionary box has been worked by the family ever since. She was always of a tender and loving disposition, and feared to do wrong, and if overtaken in a fault, she has been known to retire to her room as soon as possible, to seek and obtain forgiveness. She was brought to Christ in early life through the interest taken in her by Mrs. Brandford, of Ludlow, and united herself with our Society at Orleton Common, on the Ludlow Circuit. After leaving home for business, she found it very difficult to live a Christian life among worldly associates, but she persevered and succeeded. Her aged mother, Mrs. Proctor, now very feelingly acknowledges that Mrs. Jones never caused her any anxiety, but was a special comfort to her in all her troubles, and ever ready to bear her full share.

Thirty years ago she was married to Mr. Thomas Jones, a much respected local preacher, living at Clungunford in the Leintwardine Circuit. Her home, like that of her mother, was open for ministers and laymen alike; and sorely have they been missed, as a family, by the Leintwardine Circuit, and especially by the Clungunford Society, since their removal to Woolston nearly three years ago. Her bereaved and sorrowing husband says that his departed one constantly cared more for the loved ones around her than for herself. Not only did she render all possible affection to her husband, who has suffered from a delicate state of health for years, but it was her chief concern to train her children for the Lord, and she had the joy of seeing one of her sons become a useful and acceptable local preacher.

She had suffered only slightly in health before the final illness, but that illness was short and sharp, lasting only ten days. Although she was not able to enter into any conversation with her loved ones, yet her life had spoken in terms most unequivocal, and no one doubted her readiness for the presence of her King. She entered into rest on Sunday, Nov. 5th, 1905, aged fifty-one years, and her remains were interred at Wistanstow on the following Wednesday, the Rev. W. Hall, circuit minister, officiating, assisted by Rev. W. Clulow, and followed by several sympathising friends from adjoining circuits. The writer improved her death in Leemore Common Chapel, on Sunday afternoon, November 26th, to a large and deeply sympathetic congregation, and feelingly referred to his friendship with the family of Mrs. Jones for the last thirty years. May her dear husband, children, mother, all meet her again in the morning of the endless day and undying life.

Sarah worked as a dressmaker before her marriage.