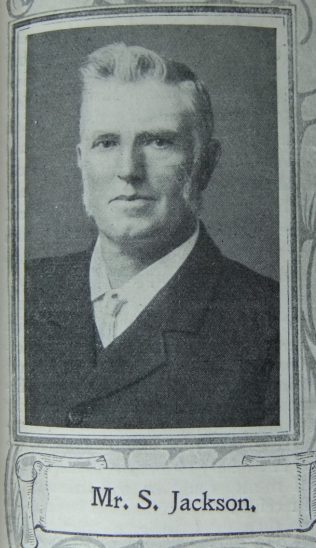 The Brough Circuit is fortunate in having for its Senior Steward, Mr. Stewardson Jackson. The circuit delights to honour him on account of the long and valuable service he has rendered to our church. His home, Town Foot Farm, Tebay, has been the home of the preachers, both lay and ministerial, ever since he was a child. Mr. Jackson is an able and popular local preacher. In this circuit of mountain and valley the journeys are often long and difficult, but the congregations can always be sure that Mr. Jackson will come. He has done a good deal of successful evangelistic work, and is in great demand for Camp Meetings, where he is a tower of strength. He is a Class-leader and Secretary to the Trustees. He has been a member of the Carlisle and Whitehaven District Committee since the formation of the District, and has been a delegate to the District Meeting and the Conference.

Stewardson died in late 1942 in Westmorland.