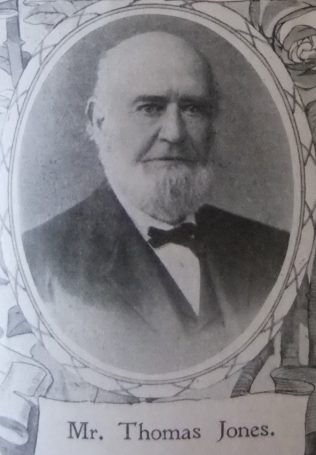 Mr. Thomas Jones, the circuit steward of Manchester II., was thrice invited to enter our ministry – by Rev. Joseph Spoor for Whitehaven, by Bury in Lancashire, and again and again by Rev. James Garner for Liverpool. Born at Kingston, Surrey, in 1830, he was converted under the ministry of the famous John Ride in 1845. He became a local preacher in 1846 and was greatly influenced in his work as an evangelist by Rev. Joseph Best, father of Rev. J.H. Best, Plymouth, and Rev. E. Rawlings, father of the Connexional solicitor. Mr Jones was the first Primitive Methodist missionary at Staines, Leverhulme, Chorlton-cum-Hardy and Altrincham. He has been associated with the Upper Moss Lane Church., Manchester, for over half a century, and has held the Circuit Stewardship for twenty-six years. The last Conference elected him a member of the Deed Poll.

Thomas was born in 1830 at Kingston, Surrey.

The 1881 census shows Thomas married to Ann (b abt 1838, Manchester). Ann possibly died in 1921. The 1911 census identifies that the marriage took place circa 1877. Census returns identify one of two children.