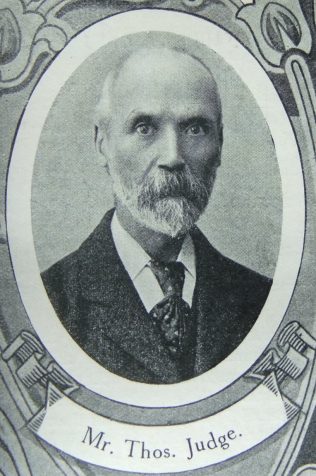 Mr. Thomas Judge, the subject of this brief sketch, is Steward of the Belper Circuit. He is one of the most modest, hard-working and genuine sons of Primitive Methodism. He is 63 years old, was born in our Church, and has never been from us. He has been for many years Superintendent of the Sunday School, Society Steward since 1880, and Circuit Steward for many years, besides holding other minor offices. All these positions he has filled with a plodding faithfulness which it would be difficult to match. He shrinks from office. No man could push himself less than he, and few have had more offices thrust upon them.

The reason is not far to seek. His brethren have a truer estimate of his worth that he himself has. He never neglects any work to which the Church appoints him, and which he sees needs doing. He lives for his Church and the Lord. May his kind be multiplied.

Thomas was born abt 1846 at Heage, Derbyshire, to parents James and Harriet. James was a labourer at an iron mine.

Thomas worked initially as an ironstone miner, but on moving from Heage to Belper in the mid 1870’s he became a cashier. The 1901 census reveals he was a cashier in a hosiery warehouse in Belper.