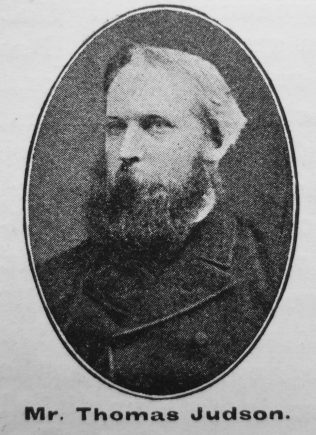 The Newark station sustained a heavy loss by the sudden death on Wednesday, Sept. 5th, 1901, as the result of a cycle accident, of Mr. Thomas Judson, the circuit steward, at the age of sixty years.

It would be difficult to speak too highly of the excellency of his life. Of a kind and genial disposition, yet unassuming in his manner, he gained himself friends wherever he went. His nature was full of sunshine.

In fact, there was no sphere of activity connected with our Church, or effort in connection with our station in which he did not take a prominent part. With the young he was greatly beloved.

By his death he has been sorely missed. We find comfort, however, in the thought that, if removed from the scenes of Christian activity on earth, he has entered the higher service of Heaven.

The funeral took place on the Saturday following his death. Part of the service was held in our Parliament Street Church, conducted by the circuit minister, a large and representative audience being present. The service was continued at the Newark cemetery, where, in addition to the large funeral cortege, an unusually large number of sympathizing townspeople assembled, thus testifying to the esteem in which they held the deceased. After the service a favourite hymn was sung at the graveside, and we left all that was mortal of our deceased brother to await a blessed resurrection to eternal life.

He has left a widow and seven children (two sons and five daughters), who have been greatly comforted by the many expressions of sympathy received, and who will, we trust, be reunited to him bye and bye, and in the land which lies beyond earth’s shadows. An impressive memorial service was held in our Parliament Street Church on Sunday, September 29th, conducted by the circuit minister.

Thomas was baptised on 23 November 1840 at Castle Bytham, Lincolnshire. His parents were Thomas, a carrier (1861), and Sarah.