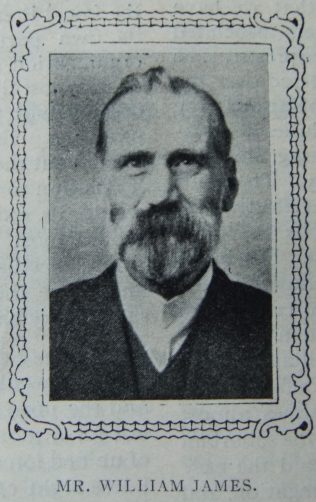 The life of William James has been full of strenuous toil. Very early he had to face great difficulties. When quite a youth he was thrown on his own resources. Happily while young he came under the influence of Rev. James Huff, was convicted of sin and surrendered to Christ. His whole-hearted devotion and aptitude for service were soon recognised so that little more than a year after his conversion he was placed on the plan. Mr. Huff urged him to prepare for the ministry, and gladly would he have done so, but an afflicted father had to be supported, and he could not see his way to leave home.

For thirty-seven years he has been a preacher. The journeys were very long and lonely. He often walked six, eight and ten miles after the night service, and had to be up early on the Monday morning to follow his occupation.

The splendid hold the Circuit has upon the great Cannock Chase mining district, is largely due to its noble band of local preachers. Among them Mr. James stands in the front rank. For the last seventeen years he has been a member of the Rycroft Church Walsall, where his services have been highly valued. He has had the joy of seeing many conversions under his ministry. His preparation for the pulpit, both of head and heart, is careful and conscientious.

From the first he has been a most ardent Sunday school worker, and he would be the readiest to acknowledge that his whole life has been greatly enriched by his labours among the young. For many years Mr. James has had charge of a large and important class. His high character, deep devotion, wide knowledge, and ripe experience specially fit him for this honoured position. Many of his members are active workers in the C.E.

William Samuel James was born abt 1852 at Stratford upon Avon, Warwickshire. His father was Samuel James.