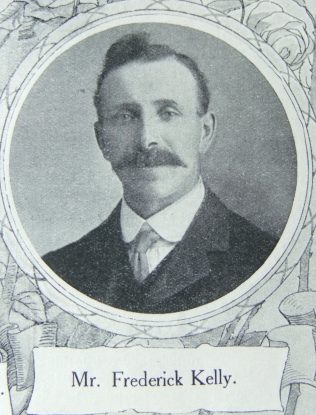 Frederick Kelly, Steward of Exmouth Circuit, was born in 1871 at Beaford, N. Devon. His father died when he was but nine days old. He owes his spiritual state largely to his mother’s influence. He has been connected with our Parade Church for twenty-one years, and during that period has been teacher and assistant superintendent of the Sunday School, assistant class leader, society steward, and trustee; for ten years he has been Secretary of the Trust, which office he retains. Mr Kelly is highly respected, he being a sincere Christian, and thoroughly loyal to our Church. He is of a modest and retiring disposition; a minister’s true friend and helper, and is most anxious for his happiness and success. His good wife is a contributor to our missions, and it is noteworthy that three of his children were collectors at the last anniversary.

Frederick was born in 1871 at Beaford, Devon. His mother, Ann, worked as a general washerwoman after her husband died.

Frederick married Annie Elford (abt1872-1964) in the summer of 1875 in the St Thomas Registration District, Devon. Census returns identify four of five children.