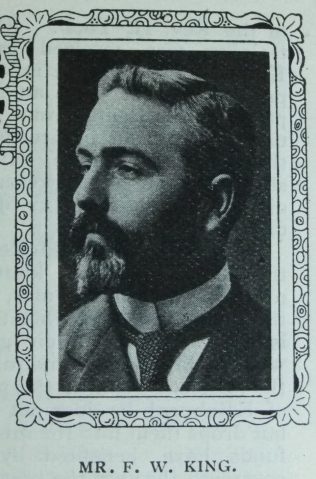 Mr. F.W. King is a local preacher in the Edinburgh Circuit. He is a most useful, conscientious, and genial official. He holds the offices of mission treasurer, society steward, school superintendent and class leader, and every position he fills with complete satisfaction to his brethren. And strange to relate he is not a “Primitive” born and bred. He was converted in 1889, and joined our Edinburgh Church in the following June during the superintendency of the Rev. H Yooll. His early religious training was received in the Church of England. Methodist influence in this case proved stronger than an Anglican “atmosphere.” He hails from Bucks., but has taken deep root in Scottish soil, and like the cedar of Lebanon, flourishes in a bleak situation. He has represented his Circuit in district meeting, and in 1905 represented his district in Conference.

All visitors to “Auld Reekie,” who call at the Livingstone Hall, know Mr. King. He meets them as they enter, waits on them for their collection, and when the service is over, is ready to act as their guide should they wish to inspect the magnificent premises of the Mission. Unlike professional guides of Edinburgh he does not pocket his “tips” but drops them in the mission coffers. The funds have benefited by more than one sovereign through the breezy urbanity of our friend. Still on the right side of forty, we predict for him fuller service and greater honour in the Church of his adoption.

Frederick was born abt 1869 in Buckinghamshire.

Frederick was married to Kate (b abt 1863). Census returns identify four children.