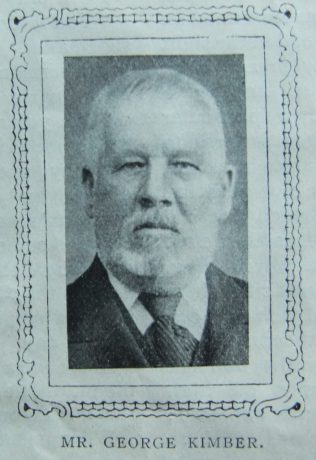 MR. KIMBER, who is a native of Farnham, Dorset, came to Bristol many years ago. When our Eastville Church was opened he and his wife joined the Society, greatly to its advantage. For over thirty years they have been hard-working members.

Mr. Kimber is a Trustee, who has acted as Church steward and served in various other capacities connected with the place. He has held the office of Society steward of this important pastorate for ten years, with credit to himself and profit to the church. He is a man of strong convictions and not easily moved from any position he feels it right to assume. He is, indeed “a pillar in the church.” He is not largely endowed with scholastic qualifications, but is a practical man of affairs. As a financier, for interest and accuracy, he excelled. His business transactions could always be relied on. By many of his fellow officials he is named “the Lloyd-George of Eastville Primitive Methodism.”

He has now attained the ripe age of sixty-seven years, and is retiring from official life with well-deserved honour. He has verily borne the burden and heat of the day, sharing the responsibilities of strenuous struggle with such courage and self-sacrifice as have earned for him the rest of his remaining years. Sincerely do we wish for him a quiet eventide, full of brightness and peace.

He has been much helped and cheered by his devoted wife, who has laboured without stint in the reduction of the huge debt on the property, now growing lighter year by year. As a collector of funds and member of the Refreshment Committee for our Annual Bazaar she will ever be gratefully remembered. “Many daughters have done virtuously, but thou excellest them all.” Peace be to the pair.

George was born in 1843 at Farnham, Dorset, to parents Edmund and Hannah. Edmund was a sawyer.

George earned his living as a stonemason/bricklayer.