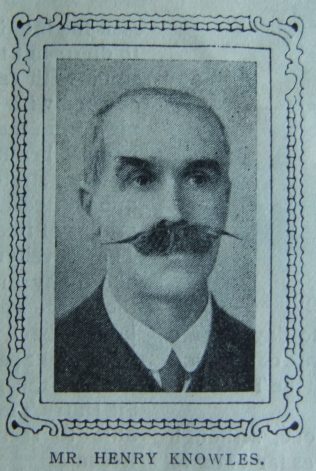 FOR a man of many parts, who does excellently in each, one might heartily commend the subject of this sketch. If there is one person who seems indispensable more than any other in the Society at the Barony. Nantwich, it is Mr. Henry Knowles. He must have got into harness very shortly after his conversion, for he has been School superintendent for twenty-two years, and Society steward twenty years. Further, for ten years he has been a local preacher, and for quite a long period Class leader and Choir master as well as Trust Treasurer. So that whether with the elders of the Church, or the singers, or the young people, or the children, he is quite at home, taking an active interest as well as a leading, organising part in all that is being done.

There is not one of the above positions he neglects for another. If one were to ask which he could be most easily spared from, for the sake of something else, it would be most difficult to decide. Further, he is not one to be seen only on the great, important occasions in connection with the Church and Sunday school, but is found regularly at the Class meeting and week night preaching service, and encourages the members of his family to attend also. Mr. Knowles also, although actively engaged in business as a coal merchant, with marked success and prosperity, finds time to interest himself in the civic affairs of the town, being a member of the Nantwich Urban District Council. In that capacity he is by no means a mere looker-on or figurehead, but one whose level-headed commonsense and sound judgment are of value to the community.

We trust he may abide in strength and that his influence for good may continually increase.

Henry was born in 1867 at Nantwich, Cheshire, to parents William and Elizabeth. William was a labourer.