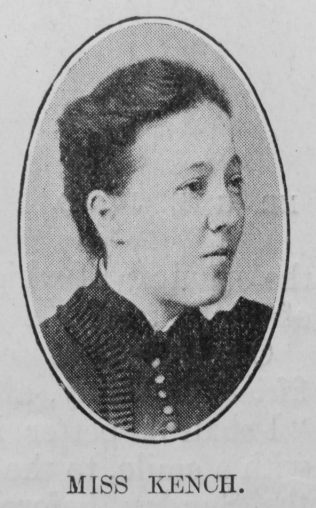 Transcription of Obituary published in the Primitive Methodist Magazine by J.W.L

MISS KENCH, one of the most respected and devoted workers of the Deeping St. James Society, in the Peterboro’ First Circuit, passed away March 16th, 1909. Daughter of the late Rev. Thomas Kench, she was born at Highworth, January 3rd, 1867. Religiously inclined from her earliest days, converted at eight years of age, at thirteen she was appointed organist at Wallingford and at fourteen became the teacher of the Girls’ Bible Class, and had the joy of bringing a number of the members to a decision for Christ.

When the C.E. movement was taken up by our Church, she became one of its first members. She was a very acceptable local preacher at one period of her life, but had to relinquish it on account of ill-health.

After serving in the Post Office at Wallingford seventeen years she was promoted to Post Mistress at Market Deeping. She exercised a remarkable influence for good upon the staff.

Marked respect was shown to her memory on the day of the funeral. Several of the staff of the Post Office were the bearers. The funeral service was conducted in the chapel and cemetery by the Revs. J.W. Lisle and E.W. Lees. A memorial service was conducted by the former minister on the following Sabbath at which there was a large congregation. Our prayer is that the mother und the two sisters who are left may be graciously sustained and comforted in their great loss.

Mercy was born on 3 January 1867 at Highworth, Wiltshire, to parents Thomas Kench, a PM minister, and Mercy Herman