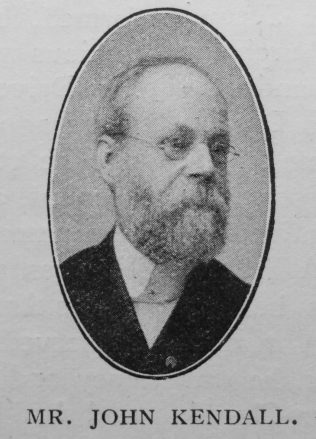 Transcription of obituary published in the Primitive Methodist Magazine by C.C. Goodall

The passing of John Kendall is a great loss to the Blackburn First Circuit. Born at the village of Whixley, near York, Mr. Kendall very early in life gave himself to Jesus Christ. Removing to Harrogate in early manhood, he gave his time ungrudgingly to the preaching of the Gospel and work amongst the young. Many in Harrogate remember with gratitude his eminent services. About thirty years ago he came to reside in Blackburn, associated himself with our Montague Street Church and took a prominent share in its activities.

Mr. Kendall was a most intelligent and acceptable local preacher, and was much in demand; but he especially devoted himself to the interests of the young, and gained an influence over the young men at Montague Street which abides to this day. He was appointed  Connexional School Examinations Secretary, which post he held for sixe years. His District Meeting elected him to its Vice-Presidency. The Blackburn Sunday School Union, one of the largest in Lancashire, appointed him its President in 1904-5.

He had been in only moderate health for some time, but the end came somewhat suddenly on April 8th. Rev. S.S. Henshaw writes: “Scores and hundreds of teachers and scholars will have his name enshrined in their hearts.” Rev. J.D. Thompson says: “He was always in labours more abundant for our Church, and especially in the interests of the young people.” Rev. W. Gelly writes: “He was far beyond the ordinary man in his fulness of knowledge and his devotion to the Church of his choice.” On April 16th, Rev. C. C. Goodall conducted a memorial service.