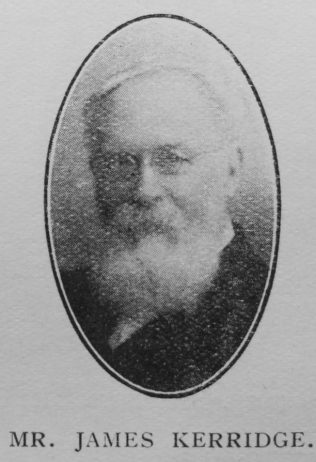 It was with deep grief we heard of the death of Bro. James Kerridge, of Wisbech. His Association with this Circuit stretches over very many years. He was a most active and diligent worker, interested in every movement that had for its object the uplifting of his fellows and the extension of righteousness. School teacher, superintendent, Circuit steward, local preacher, he had more than a Circuit reputation. He had represented his Circuit many times at District Meeting, the first time being in 1862, and had also been a District representative to Conference. He had been secretary to the Wisbech Temperance Society for twenty years, and of the Juvenile Local Peace Association for fifteen years. He was also a member of the Bible Society and of the Free Church Council.

He will ever be remembered as a strong debater, an earnest and vigorous preacher, a strong temperance advocate, an enthusiastic worker of the Peace Association. He was a wide reader, and was never afraid of expressing his convictions.

An architect by profession, no fewer than five hundred chapels had been built by him. He became a member of the Institute of Civil Engineers in 1853 and a F.I.A.S. in 1905. He had been Surveyor to the Local Urban Authority for thirty years, and previously to that was a member of the Local Board of Health.

For some time he had been in failing health, and the Quarterly Meeting had expressed by letter its sympathy with him in his illness. The end came very suddenly. His remains were laid to rest in the Leverington Road Cemetery on Friday, March 31st, amidst manifold tokens of respect. A great number followed, including many representatives of the Church and various Societies with which he had been connected. The service was conducted by the Rev. A.E. Rose and Rev. J. Youngs, vicar of Walsoken, an old friend of the deceased of many years standing.